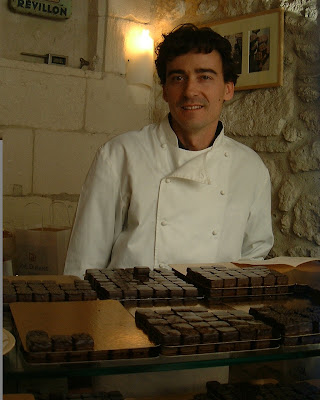 I've a couple books on back burners that I'm slowly putting together. One in particular is in collaboration with my artisan friends. To that end, I invited Joel Durand, the chocolatier of St. Rémy to lunch on Thursday to discuss future collaborations. We've worked together, teaching my cooking clients about chocolate, or simply giving them oodles of tastes and showing them the laboratory, for years now. I remember mutual congratulations upon the birth of his last child (Lucy) and the birth of Jonas. Both just over 7 years' old now, they were born only months apart.

Joel is one of those men who shake up people who come upon him. He is a whirlwind of energy, focus and ambition. That might be a normal description of a New Yorker, but in Provence? no, he's not too typical. At the moment, he has his St. Remy shop (now more than 10 years' old) and his large completely renovated laboratory nearby. But he also has two more shops (St. Paul de Vence, and...) plus a deal with the Bon Marché in Paris and soon Printemps in Toulon. He exports via a high end catalog in Japan, and to Germany, and to any client who contacts him by fax or email desiring Fed-ex shipped divinity. At the same time he has cultivated and cared for his local clientele. They might be jazz artists, house-wives, businessmen, teens, what-have-you. He has the knack. He has also just recently finished the mock-up for his book on chocolate and it will be coming out (in French at this point) in April. Earlier this year when I stopped by the shop, I came upon him and his photographer blending dark cocoa into whipped meringued egg whites... it was quite beautiful.

A son of engineers, he told his parents he wanted to either go into pastries or racing cars. Reasonable folk, they opted for the former. Thus he has a top-notch education in all things pastry. He is in perpetual motion, both in the shop, and in his head. Strategizing over new possibilities, brain-storming, in close discussion with his accountant as to what is possible, how to pay for it, etc., And with his skill at viewing the larger story but also following behind on all the details, he has year in and year out, put into play his ideas. At times he lives the cliché of the ever-ringing cell-phone. But, it is undeniable that everything he does, he does 100%. Truly a master-engineer of his own career and the products he sells.

Our lunch began discussing family and children -- divorced, he has partial custody of his 3 girls, and is managing quite well by them. Then we moved on to my situation -- working its way towards stable. And here I piped up suggesting that when he decides to do the English version of his book, that he give me a call. He was open to the idea, and perhaps sometime in the next year, we'll get together and discuss that project. In the meantime, I explained my book idea to him and my desire to work together, to interview him to get a good sense of "a day in the life of; a week in the life of; a year in the life of" and his background education that brought him to this point. We also discussed the possible recipes we could include in my book, with a link and references back to his. He was quite willing to participate, and we set up a future date to do our interview, looking at post-Easter for the teens'/kids' cooking class. 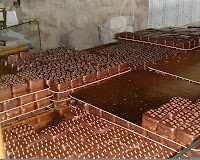 As a business gesture, and just because (it's so difficult discussing these things) I picked up the tab for our lunch. But of course, when we got back to the shop, he handed me a wonderful basket of chocolates to bring home to my brood.

Oh, and did I mention that he is extremely attractive? Thick curly black hair, piercing eyes, intense, tall, athletic. And yes, he is currently single, but I'm not, and in any case, I think as a couple it just wouldn't work. Just too much combined energy! But I do admit to dressing just a wee bit more elegantly each time I go to St. Remy.
Publié par Madeleine Vedel à l'adresse Saturday, February 21, 2009