Sailing on the Mediterranean 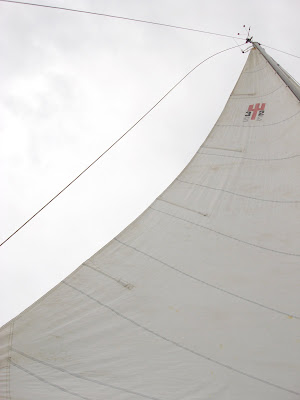 Martine and I had decided to spend Thursday, Ascension day, either hiking or... something fun and outdoors. We don't get to see each other that often, despite our closeness, and I jumped at the chance. Tuesday, when we were able to find a moment to confirm plans, she told me that a friend had a boat and we were both invited to spend Thursday with him, sailing on the Mediterranean.

I was raised in a family that loves boats, sail boats in particular. My mother's sailed on our small lake in Northern Michigan all her life. She taught my father to sail, and he took to it with a passion, purchasing a sail boat to moor in front of our home on Long Island Sound in NY, which he then hooked up to a trailer, and brought to MIchigan every summer. So, I've been crew, handled the jib and the tiller, and been a happy sunfish sailor most of my life. Being that this was a shared passion of my parents, they somehow came across sailing friends with relative regularity to sail on Lake Michigan and when traveling in Europe. One memorable sail of my teen years was off the cost of Antibes, on the Côte d'Azur. I was staying with a family, working on my French in the little hilltown of Biot behind Antibes. They took me along on a friend's boat for a day sail on the Mediterranean. The water was crystal clear, the sun high in the sky, the breeze relatively strong, and the jagged rocks and cliffs spectacular. We anchored between some rocky islands at lunchtime, where we leapt off the boat to swim in the sea. I still remember a passenger on a neighboring boat, a girl-woman with the most beautiful body, and only a tiny triangle and two strings to cover her modesty. Yes, a self-conscious teenager aware that her hips were a bit generous, etc., I did notice when a particularly perfect female was in view. 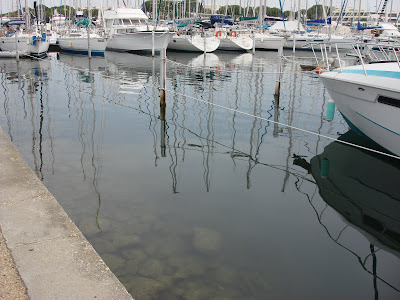 However, since I've lived in Provence, the only boats I've been on have been a kayak (going down the Gardon river under the Pont du Gard -- I'm not complaining!) and an old-time fishing boat chug-chugging on the Rhône with the kids from our teen courses. Somehow, I never did get onto a sailing vessel in the all the years I lived in Arles. Till yesterday, I'd not been back on a sail boat, and certainly not on the sea just a half hour to the south.

Martine and her friend Bernard changed all that. We set out early and headed to Le Grau-du-Roi and the port right beside it, Port Camargue. To get there we went past the steep ramparts of Aigues Mortes (built between 1244-1254), keeping the stone walls to our left and the canal to the sea dug by King Louis the IX (aka St. Louis) to access the sea just a few kilometers to the south on our right. Between the ramparts and the city are the salt marshes of La Baleine salt, and the Listel vin de sables wineries. From Arles it is an hour's drive, from Vauvert thirty minutes. 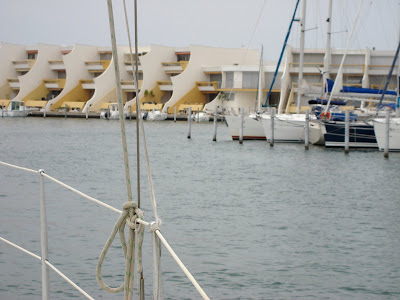 Le Grau-du-Roi is a vacation residence/port on Mediterranean equidistant to Nîmes and Montpellier. It is the beach place for the city-folk, not too far, but just enough, with many, many rental and purchasable apartments built in the 1960s and 1970s -- with that highly stylized poured concrete architecture in sorbet colors that would look perfect in a James Bond film... or even late Elvis. It may have once been a simple fishing village. However, what you see now was put there by politicians and urban planners, and with a vengeance. JP's parents met and fell in love there. Many a family outing was enjoyed on the beaches and strolling along the boardwalk. Later his father purchased an apartment there, which the family later sold. Numerous friends of his still have their little spot in the sun there. And, come high-summer, wonderful beach-side restaurants set up camp to cater to us city-folk in need of a late summer sunset over the sea, barefoot walks in the sand, a glass of crisp summer wine, and perhaps an evening of Salsa dancing. 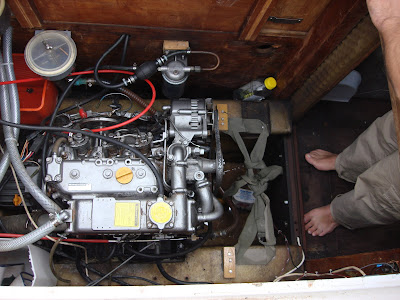 We went straight out to the port, parked the car and brought our things to Bernard's little wonder. The boat has the standard two sails, a wheel rather than a tiller, and cabins afore and aft. You could sleep 6 bodies very tightly in it, fix a few meals, and if necessary, use the head (though the preferred spot to relieve oneself is apparently in the sea, off the back of the boat). Before we could set off, Bernard set to work getting the motor up and running. He'd brought a starter and a battery, so this happily didn't take too long. He then put on his wet suit, duck-taped a snorkel to a garden hose, which he then attached to an aquarium oxygen pump, and he jumped into the water to scrape off the barnacles and mussels incrusted on the helix behind. Boat people do need to be skilled in an array of tasks, creative problem solving on the top of the list. 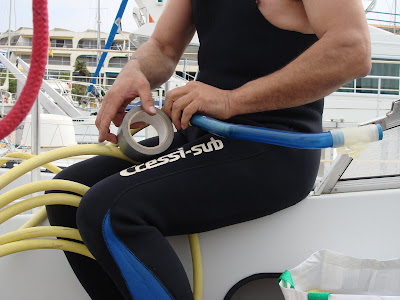 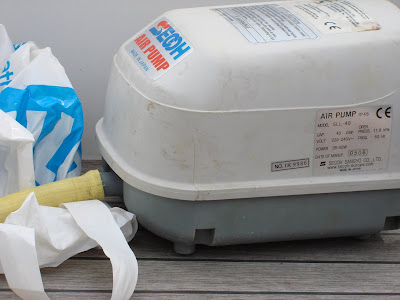 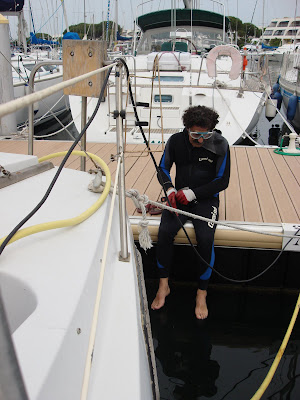 It took a couple of hours for all to be set, and then, off we went, maneuvering rather awkwardly with the small motor, the tub-shape of the boat, and many another day-tripper alongside with the same plan in mind. At last, we were out of the harbor and Martine proved herself a very experienced sailor, jumping up to raise the mainsail and jib, hooking pulling, tying off, and such as necessary till we were fully a'sail. She'd spent over a year working on a large boat on the Mediterranean, around the coast-line of Corsica in her twenties. And it all came back to her. She moved with ease and assuredness, and kept an eye on the wind, the state of the sails, and our fellow pleasure boats with the eyes of a pro. I'm afraid I took photos and admired her as she worked. All my sailing years are far in the distance at this point, and I was simply in a state of hesitation and observation. 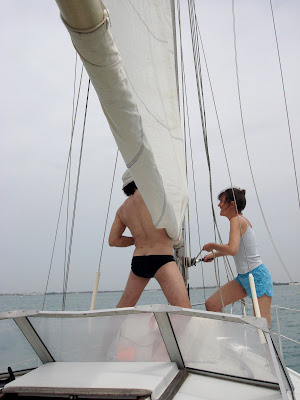 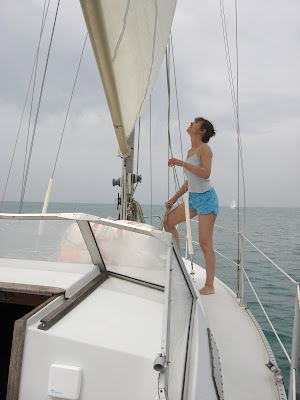 With the sails up, we were able to break out lunch: my bread (with some nutty quinoa flakes in the mix... yum), local saucisson, JP's organic rosé wine, and Martine's salad of organic fava beans, pea pods, and carrots (all lightly cooked) with a sauce of tahini, soy sauce, olive oil, and a touch of water. Martine also brought along a delicious cherry mousse cake from the vocational high school where she is a social worker. Life could be worse, hm? 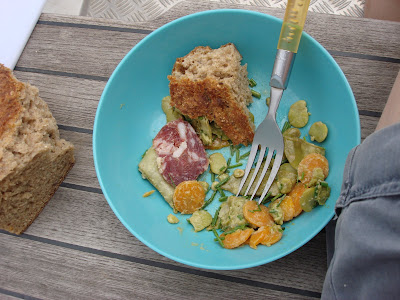 The weather was warm, lightly breezy (no major gusts, but that was ok), and gray. We were far from alone on the water, and had to keep a regular look-out under the jib for potential collisions. Conversation roamed all over, returning frequently to shop and work talk between Martine and Bernard (both social workers who work with troubled teens). 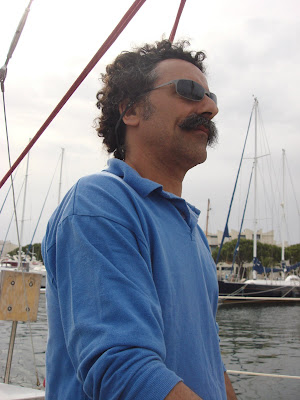 Myself, I chatted, ate, drank, photographed, and, sweetly cradled by the gentle waves and the solid tubbiness of the boat, lay down and napped for a time. Once you're on the water, sails up, and the sea beneath and all around you, you've no other choice but to slow down, take your time, listen, be, and perhaps recover from cleaning out your swimming pool, installing a kitchen counter, and entertaining five Canadians. Ahhhhhh. 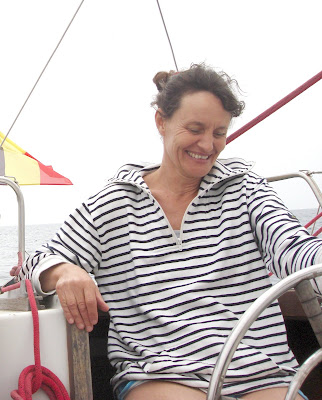