Climbing a steep hill with goats

What a day! The French have a great saying "resourcer" meaning going back to your source, back to the source of your knowledge, learning, roots, family, nourishment, inspiration... And that's what it's like when I'm back here. 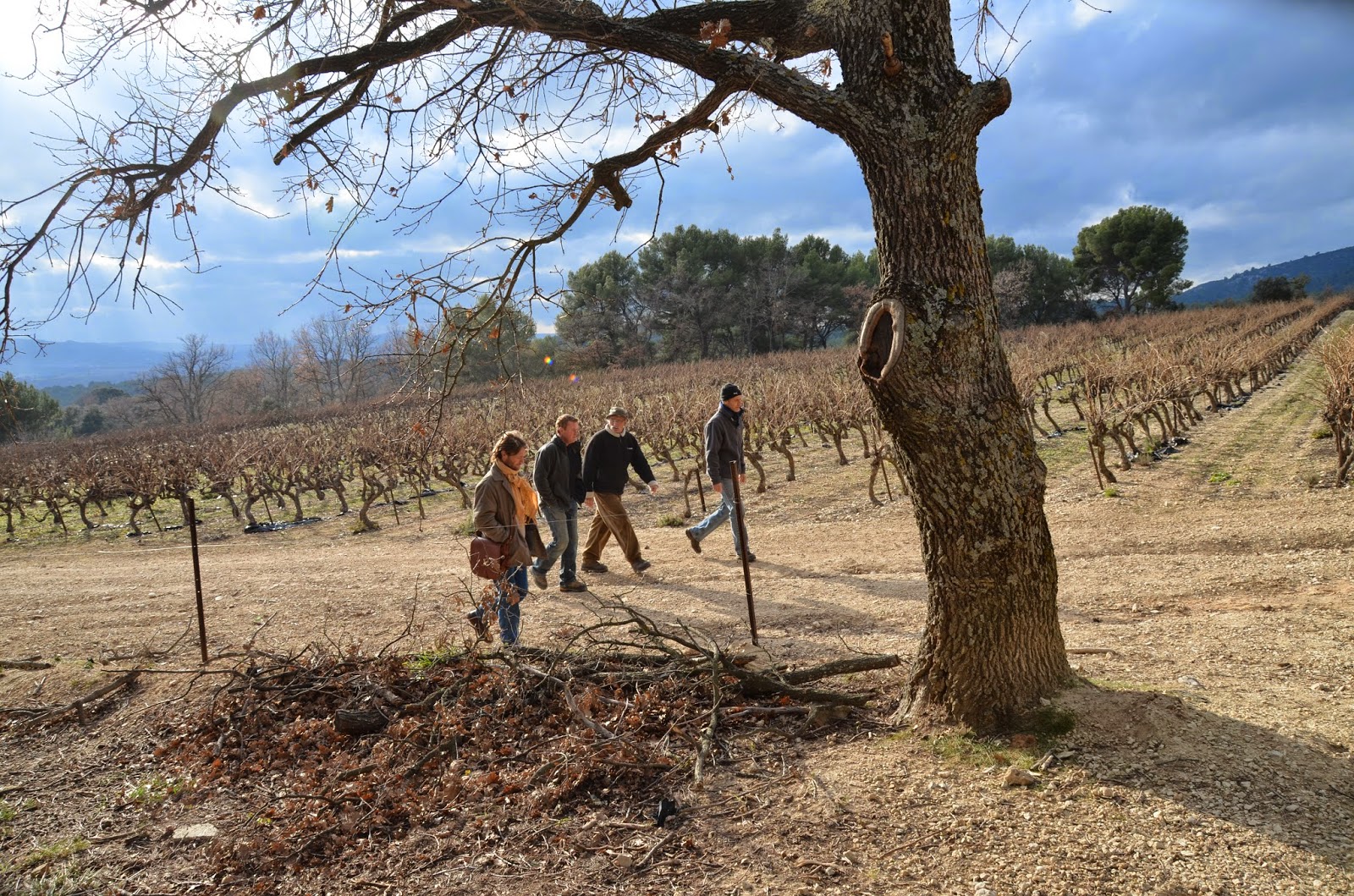 Today was a trip to meet with a handful of sheep and goat herders, some for meat, some for cheese, out in the Lubéron, up in the hills above Lauris. We were in the home and pasture lands of a young goat herder. His wife makes the cheese, he cares for the goats. There were but 40 or so, all with horns, raised biodynamically, and pastured on and over and in the rough and steep grounds of the Luberon park land, aka, Garrigue, rich in herbs such as rosemary and thyme, covered in short little oak trees, and speckled with prickly juniper, majenta rockroses, and more (depending the season). 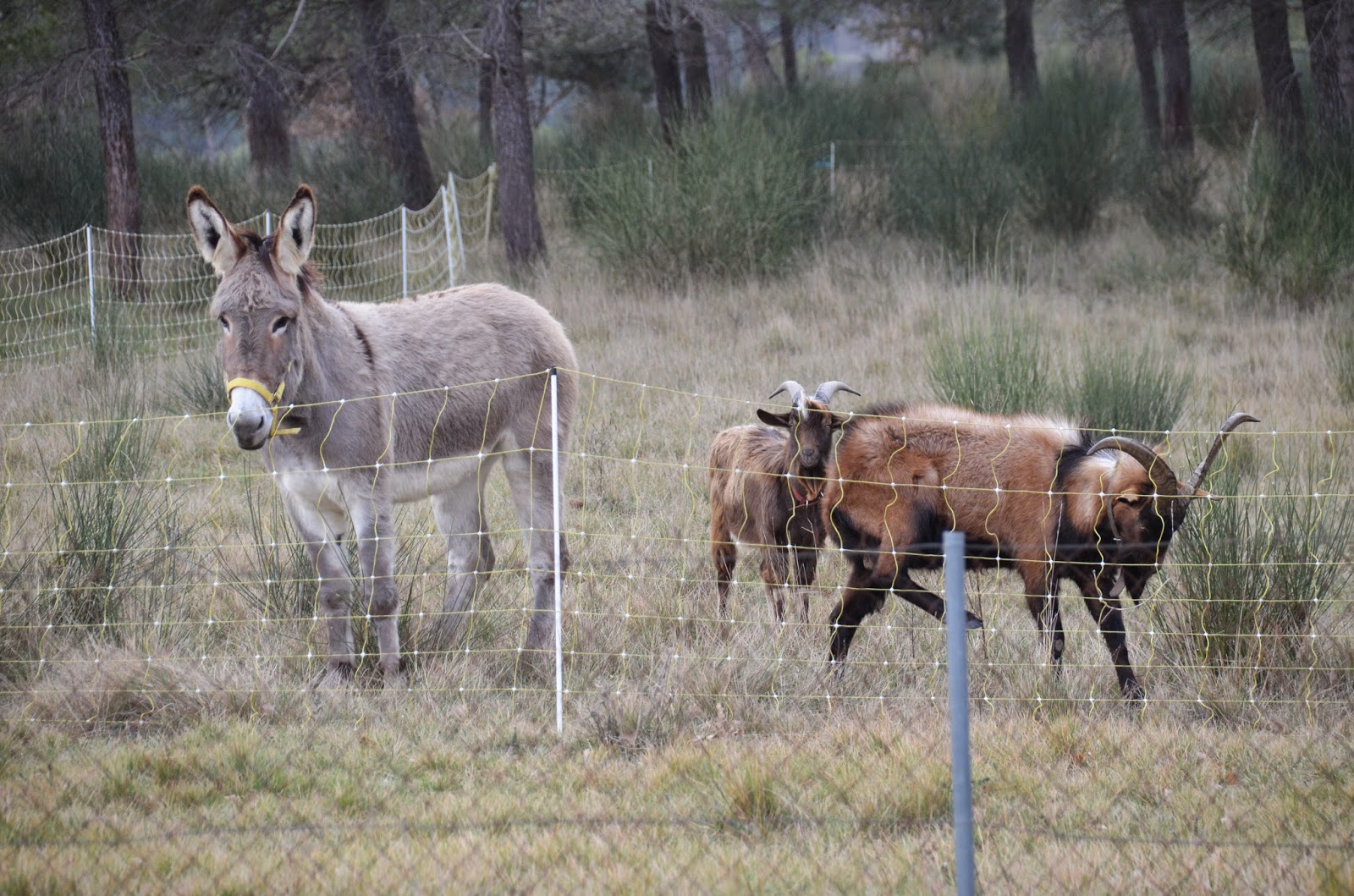 As we presented ourselves to each other we sipped freshly infused thyme and rosemary (no coffee here). When the presentations got to me, after learning of the man who has 100 Rove goats and 20 years handling them, the young man who has 300 sheep all kept out of doors, the neighbor who has 50 sheep, and looks towards more, and my friend Catherine with her handful of black belly meat sheep, I shared my Franco-American background. François, with his 100 Rove goats looked at me and said, "hey, I've heard about you! From Laure, the "commercialle" at Maison Mons, and oh yes, I know Claudine Malbosc, I did my internship with her and Yves 20 years ago, and of course I know Jacky, and Hélène, annd Christian... " And so it goes. The world of goats is quite small. And tales of my project creation in Michigan have traveled far. 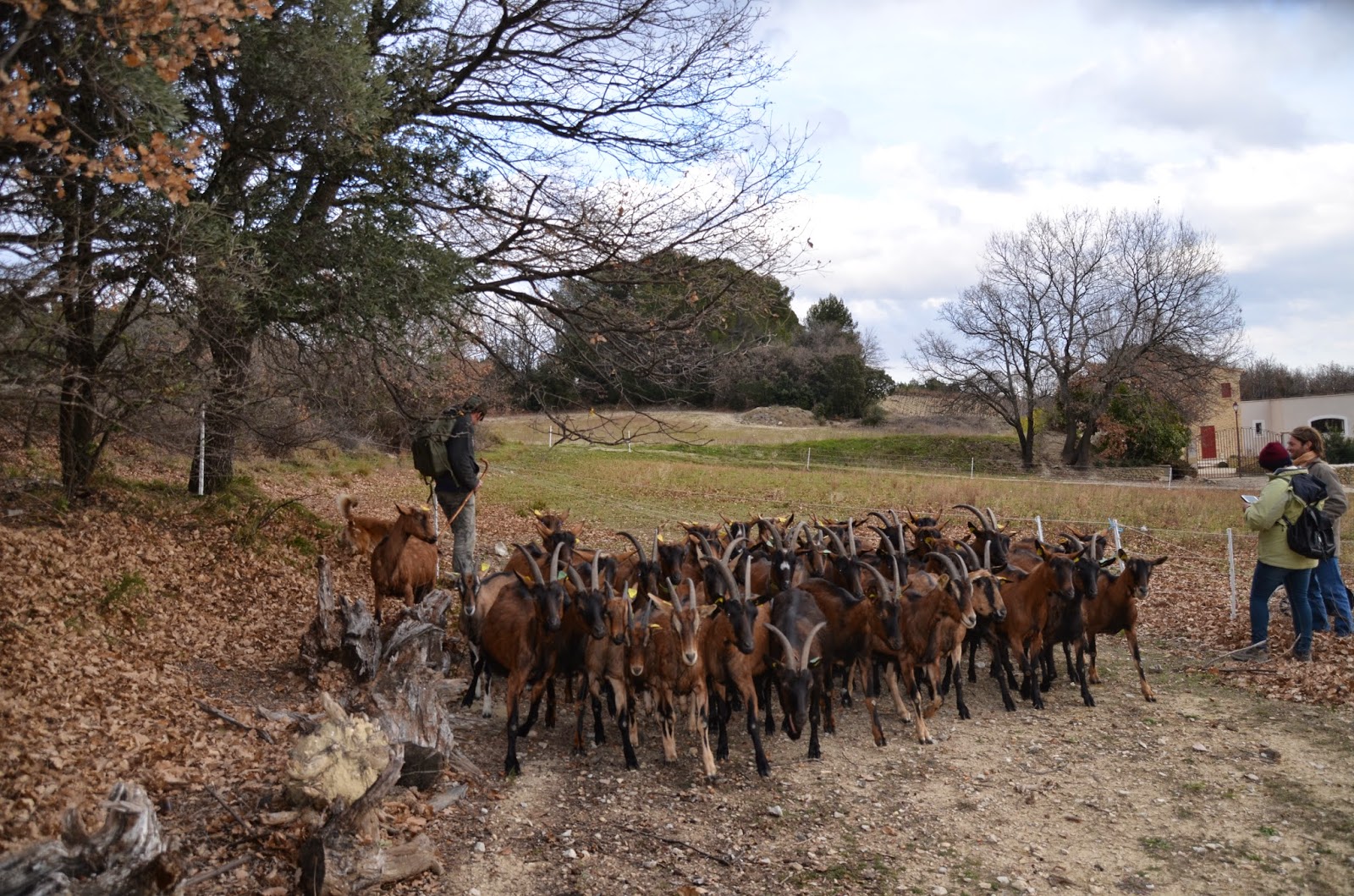 As we headed out to walk the goats, we first visited the bucks, calmly kept in a field (all the time, their only shelter the trees) with a donkey. The donkey acts as a social buffer, both protecting, but also quieting the bucks.

I couldn't help but gravitate towards a marvelous older man who was telling tales of dining upon his truffles. I listened closely as he regaled us with how to make the most amazingly flavored blood sausage (boudin noir) possible. Well, the week before you slaughter your pig, you give her a bucket of truffles (these are apparently low-cost when you can find them in your backyard, i.e. the Lubéron hills) daily. When at last you slit her throat, the blood that spills will be scented with truffles. Catch it in your frying pan, stir it up, and fill your casings. 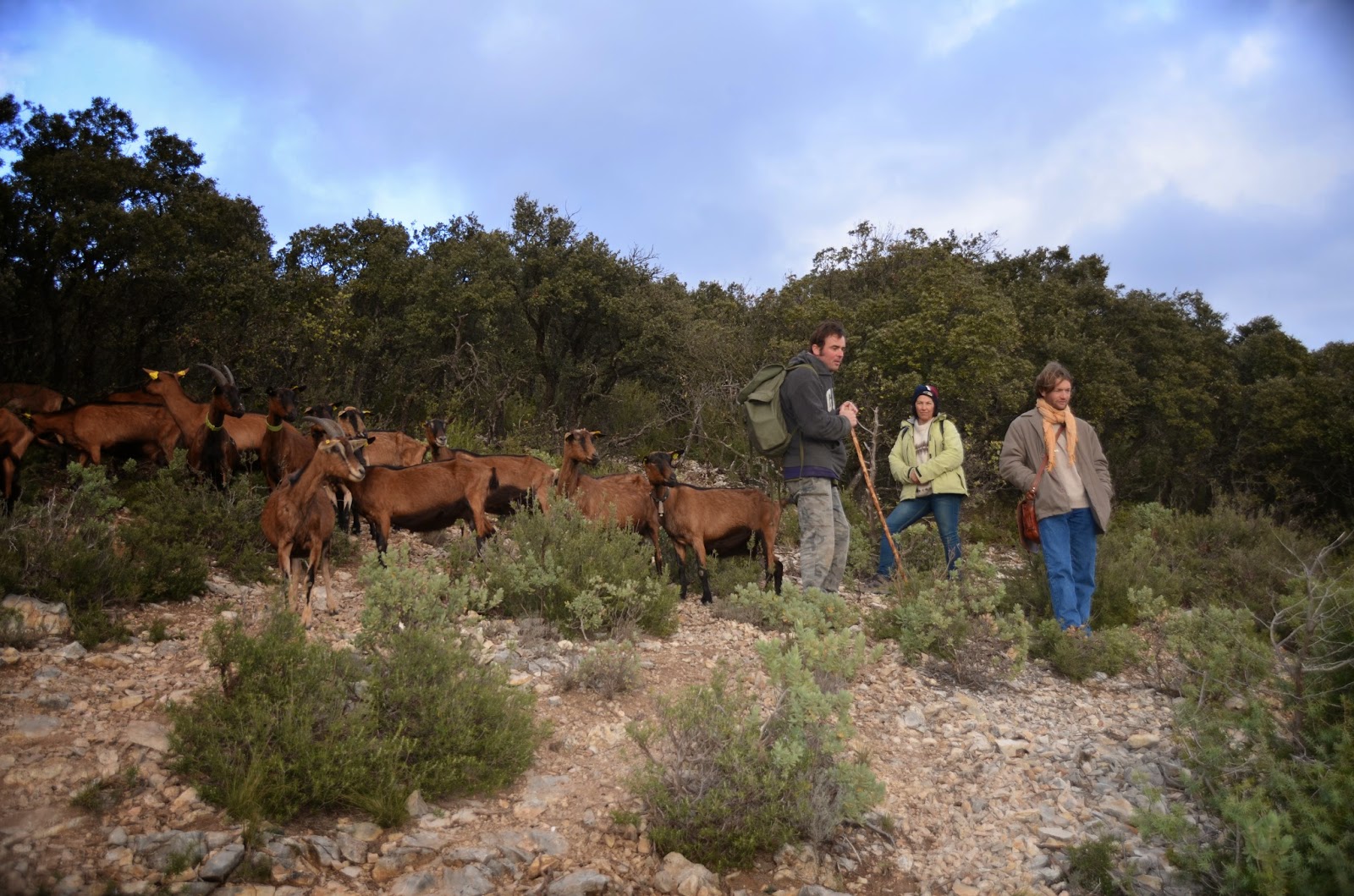 Truffles being his primary income source, he has his methods. Leaving the village with your dog early morning is simply too suspect. Someone's going to follow you. And, well, the truffle fly method is something you do between 12 & 2pm, again a very suspicious time to be out and about (normal humans lunch and nap at these hours). So, to out-wit any sneaky, some-time friends who might wish to suss out truffle hot-spots, you must adopt a different tactic. Jeannot goes out for his primary investigative walks in August and September. When he spots what are called white truffle mushrooms, spikes that come up, perhaps split and crackled on the cap, he marks the spot with a few barley grains (after harvesting these white mushrooms to take back home for his mid-day omelette). When he returns to the hills late fall/winter, the barley has grown, and the truffle beneath it will have burned it golden. He can spot these even by the light of the moon. And so, he collects his truffles, takes them home and sells them, no one the wiser. 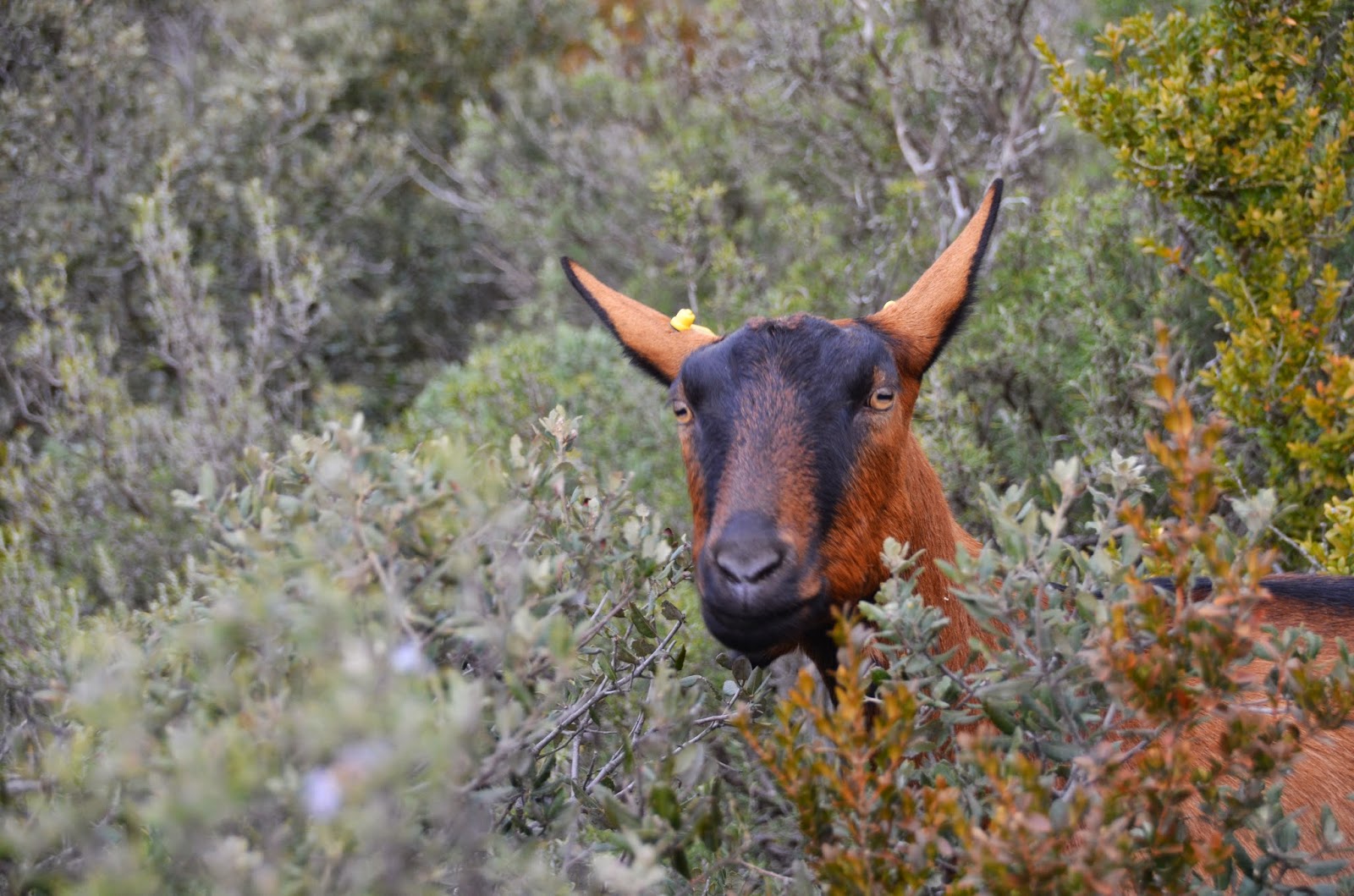 Our goat-herder took us up into the hills along a portion of his daily three hour tour. Steeply we climbed, slipping in the shale, trying not to pull on the rough oak scrub brush to pull us up to the next level. Breathing hard, we huffed and puffed to where the goats were happily nibbling the oak leaves and the rosemary buds in a fresh stand of greenery.

Our herder/host explained that his goats do not have issues with parasites, and are in excellent health. There are, however, the occasional "mechanical" problem. I.e. we spotted a very happy and active 3 legged goat (he did not divulge how she became 3 legged.. so the mystery remains), goats get tears on their teats, and ear tags get lost in the branches. But, all in all, it's a small price to pay for healthy goats. He likes the quality of his milk as well. Back by the milking stand he has a manger full of hay, so they can eat to their hearts' delight before and after milking - should they need to. 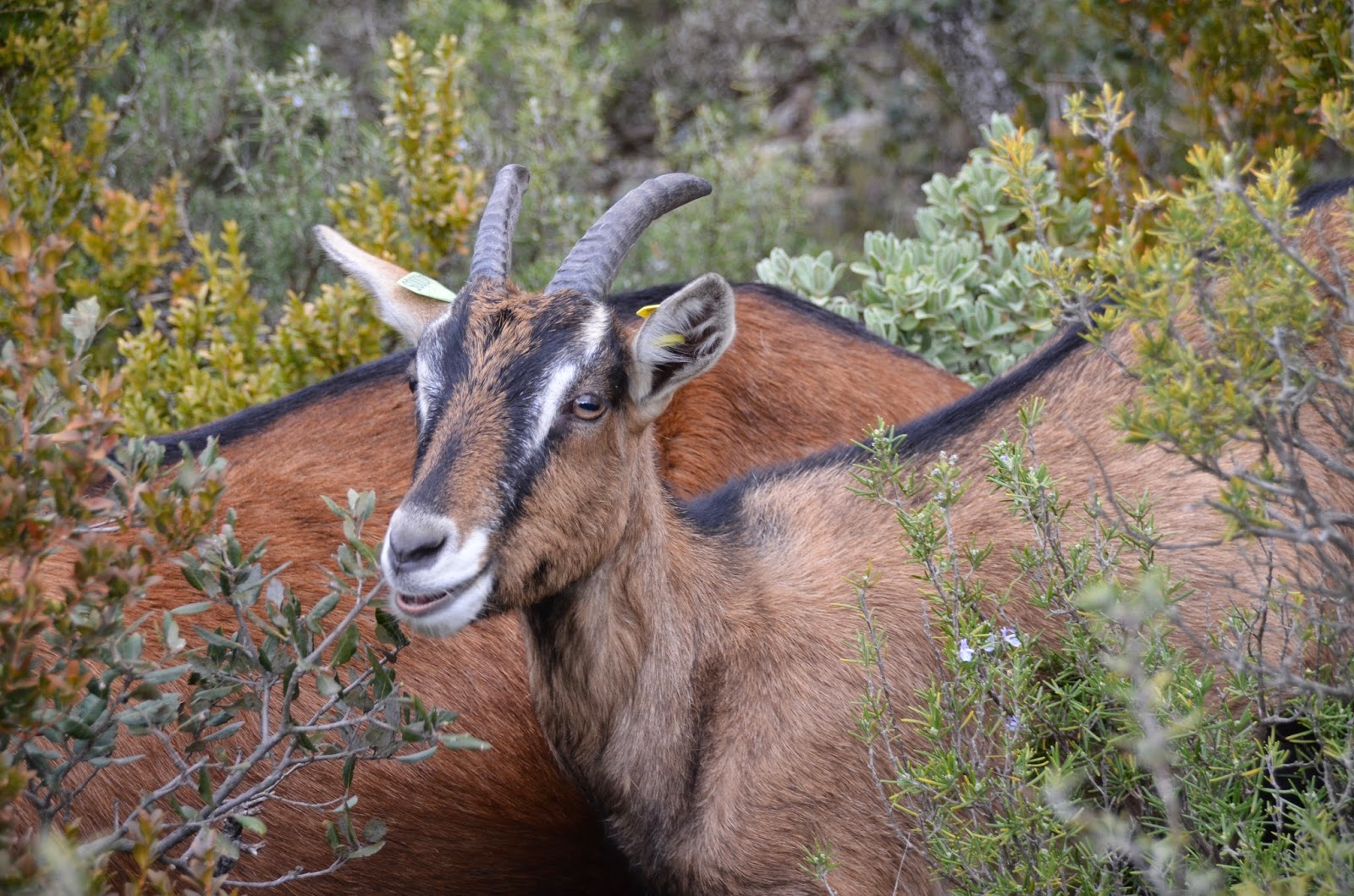 Certain stands of prairie down by his barn are planted in alfalfa and a mix of prairie grasses. The latter a mix so delicious and varied that his goats barely reject any of the 1st cutting. OK, I'm speaking goat breeder talk here. But if you knew goats, you'd realize that this is important news. I'm going to learn about this mix! Rejection of a goodly portion of their hay, tossing it on the ground, etc., by goats is a classic woe of many a goat herder. And, in general, the saying goes, give your first cutting to the horses, the 2nd and 3rd cuttings to the goats. So delicious and much appreciated 1st cutting? I'm in!

As we head back down from the hill top, we discussed when you move your goats from one area to another (when a 1/3 has been eaten, no more), and which plants suffer more or less from the passage of the goats. My colleague with the Roves mentioned a recent class in pasturing where they'd discussed whether it is a good or bad thing when goats get up on their hind legs to nibble in the trees (a sign that there is no longer sufficient nourishment at their head level). 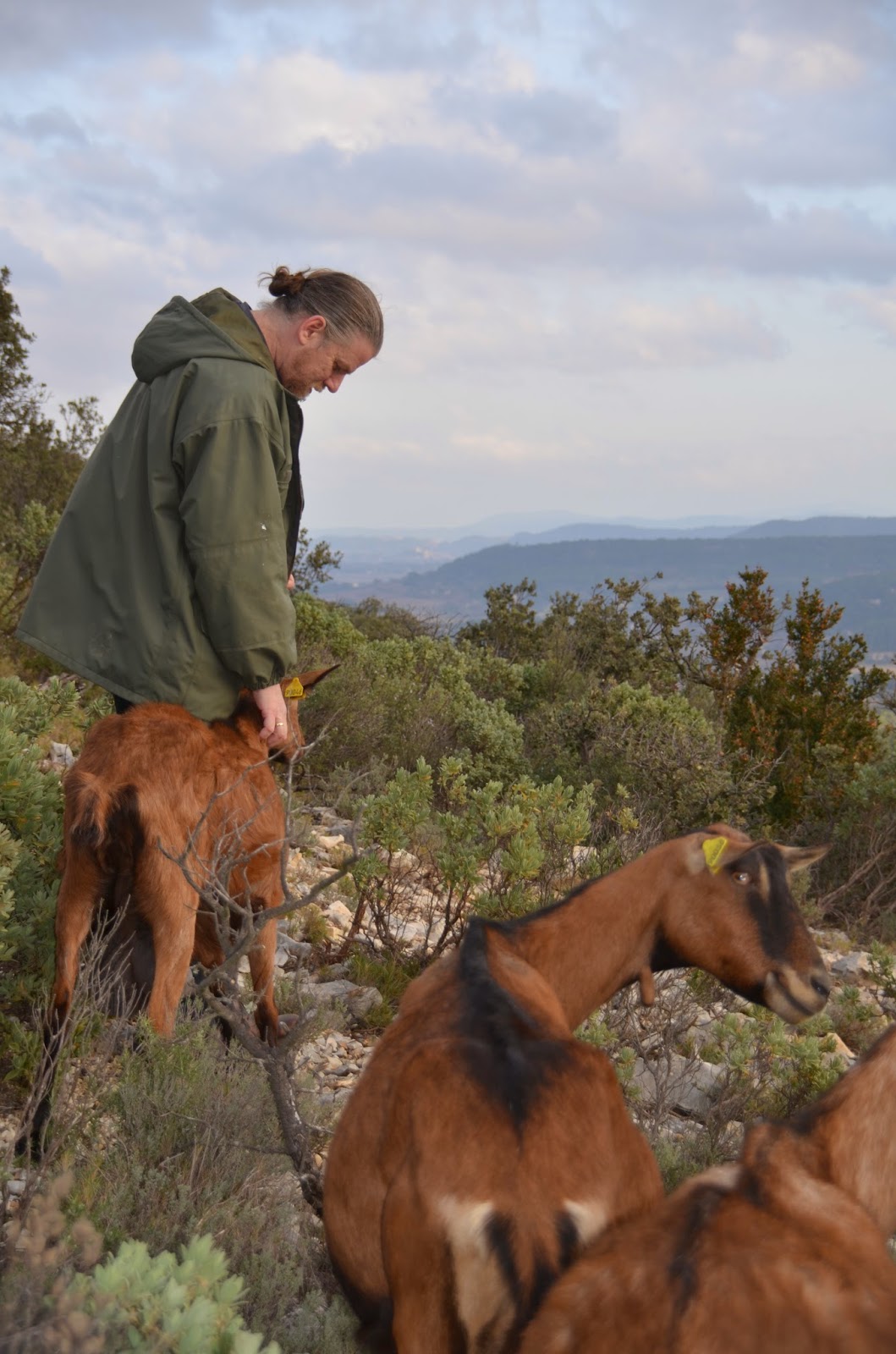 One participant had his copy of today's Liberation paper, upon which every known vulgar and rude curse word had been printed in yellow. With the title in bold red. This, stated the man holding the paper, is what Liberty means to us in France. Completely and total free expression, even if it is rude, vulgar or in poor taste. It is following the example of Charlie Hebdo, and the recent marches all over France. Journalistic freedom & individual freedom of expression are ferociously in the forefront of everyone's mind. France is adamantly a Republic, where the separation of Church and State have been forcibly chosen and enforced. 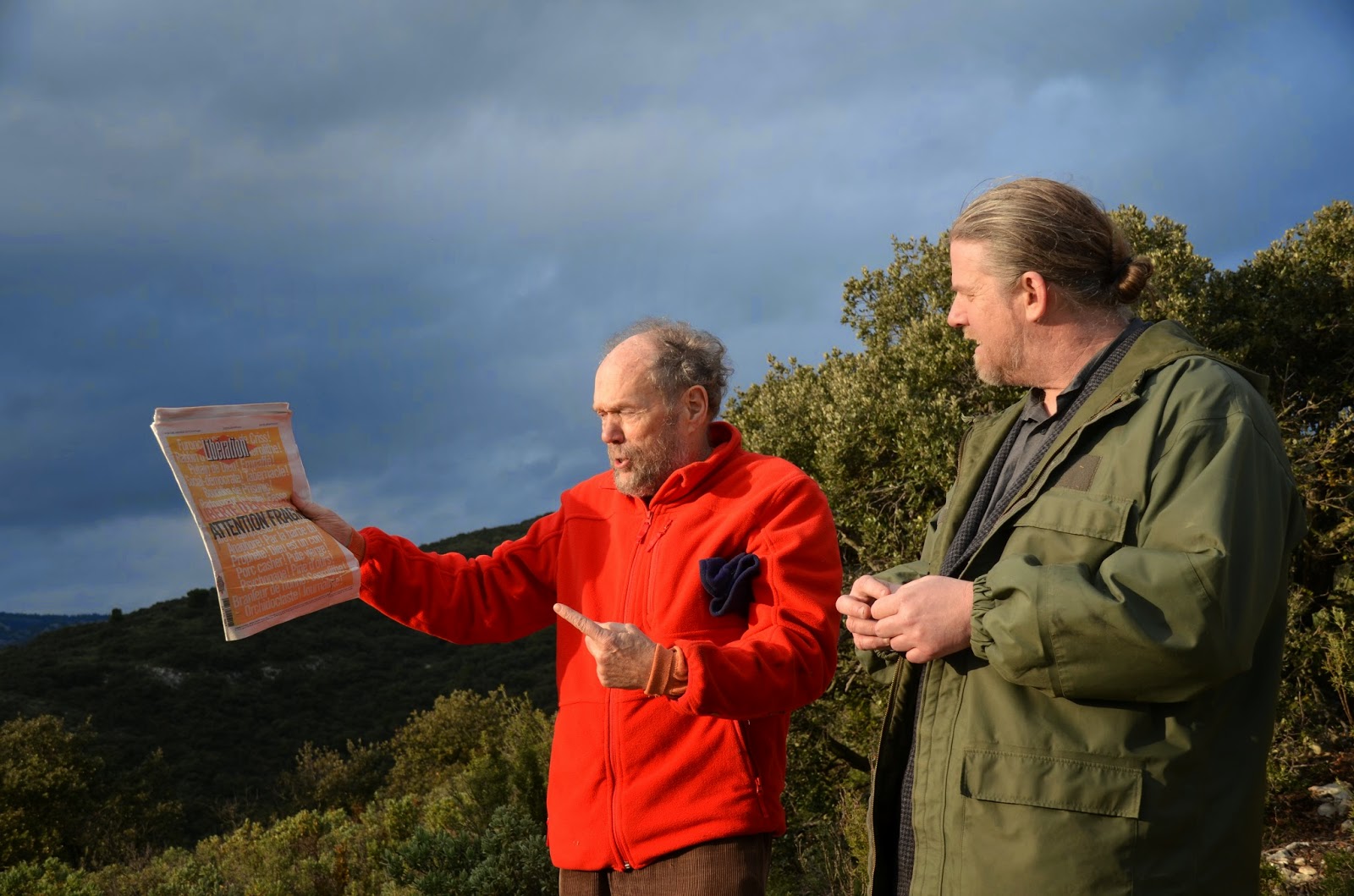 Vive La France - for all its virtues, vices, joys & sorrows, traditions and contradictions. 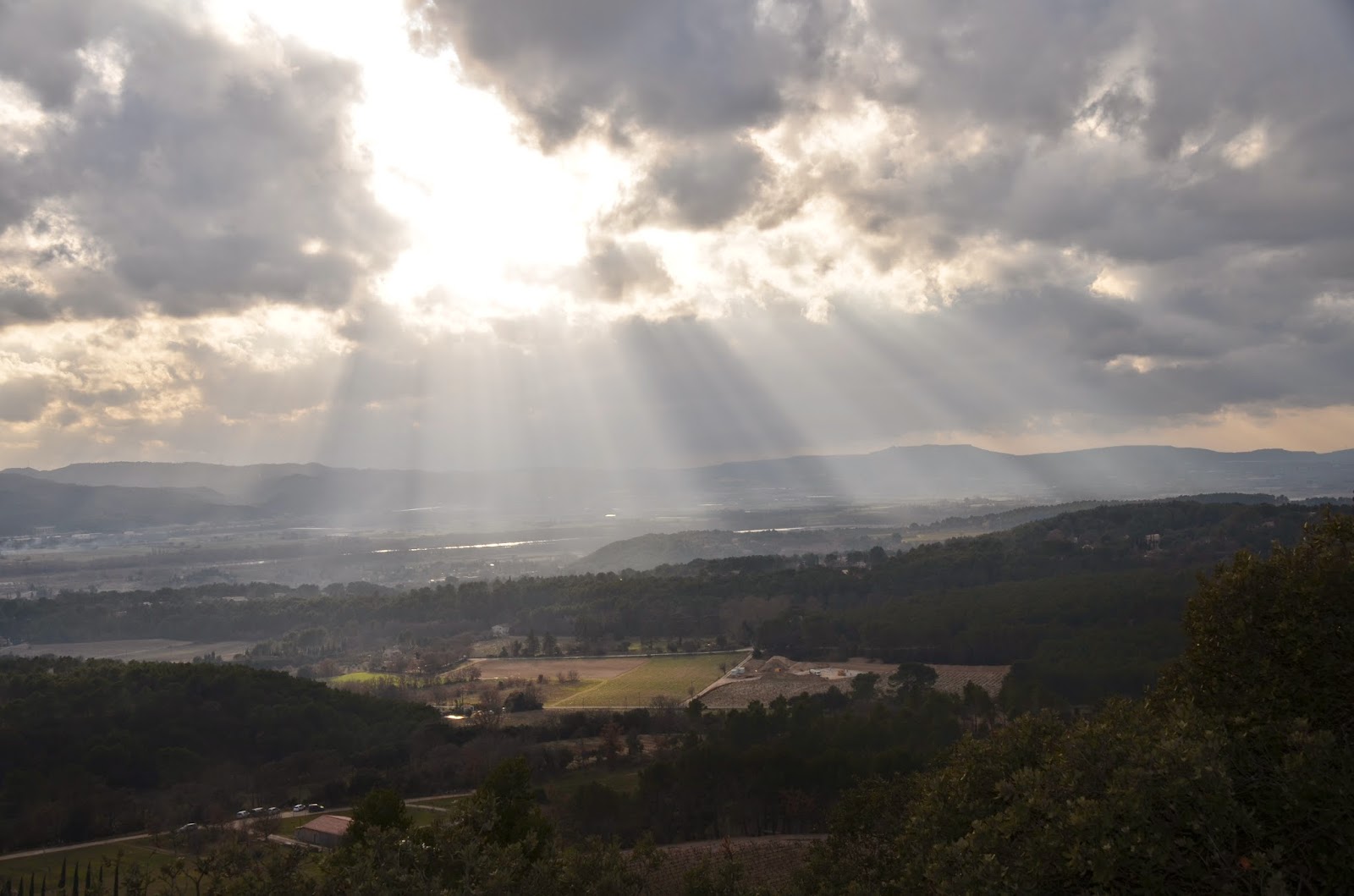 A view of the Luberon Hills.

I enjoyed reading this, Madeleine! On our trip in the spring of 2013, the hubby and I were sitting in our car eating farmer's market goodies near a reservoir park in Apt when a gentleman with a herd of goats and sheep came through the parking lot. The goats had tall curled horns like I had never seen before. It was fun to be in the midst of the traveling herd.