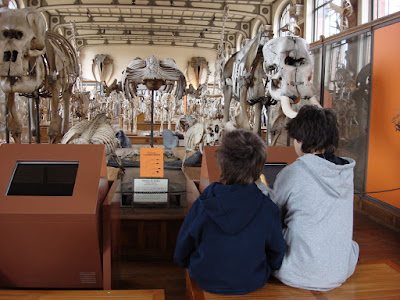 This is a mother and her kids' post. Culinarily speaking, the weekend was not truly up to snuff -- I'm not a fan of mediocre fries, starchy burgers, just small enough sweets to stimulate demands barely an hour later for more, not to mention sweet sodas. However, it was a weekend that stemmed from my children's very good behavior while I plowed through the hundreds of wine tasting notes for my translation earlier this year. I promised them a trip to Disneyland. I never thought I'd do such a thing. Nor did they. As I say to friends, my parents brought me to Europe! We never did Disney anything when I was little, and as a baby buster, I missed out on all the Disney films (I still haven't seen Snow White or Cinderella).

Why was I willing? Why such a change of heart? Well, at some point last year, JP mentioned that he'd enjoyed Disneyland with his children and that he'd be willing to go there again. You can imagine that hearing that once was enough to have it firmly registered on my brain. Financially, it is a chunk -- the TGV tickets, a hotel room, entry fees, food for the weekend etc., -- so I held off for a good long while. However, with the funds from my translation making their way to my bank account, I bit the bullet, and off we went. 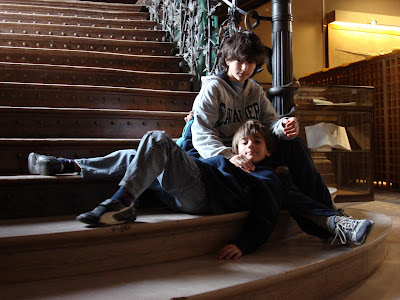 An early train ride on Friday morning began the adventure. This brought us to Paris for a visit to my old haunts. Lunch at the Brasserie de l'Ile St. Louis where two servers from my years in Paris (1995-1997) were still there, and greeted me with kisses and that marvelous look of recognition that makes you feel warm and special inside. The Maître d'hôtel was clearly the son of the Patron of my time there. Lunch finished, I promised to return to see his father in the evening. Then we set out for an after-lunch walk down the Seine to the Jardin des Plantes, where we wandered into the dinosaur and animal skeleton exhibits -- an amazing collection dating to Victorian times. You can feel Darwin and his fellow curious scientists in the room, painstakingly putting together these fragile puzzles of bones. There were classes of art students positioned on the floor sketching craniums, back bones, tails, jaws, teeth. My boys were wistful that I hadn't brought paper and pencils so they might join them. As was I. We'd done some mellow sketching and at the exhibits of the New York Museum of Natural History, paper and pencils in hand, and this visit brought back those good memories. 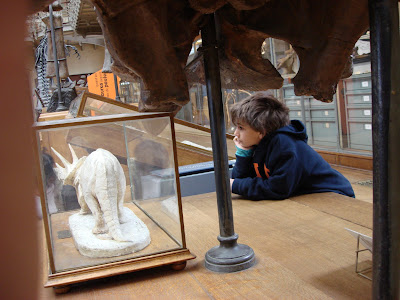 I suggested, and JP was willing, that we walk everywhere -- from the Gare de Lyon to the Ile St. Louis, from there to the Jardin des Plantes, from there back to l'Ile for drinks with friends, and from there back to the Gare and off to our hotel out by Disneyland. Back when I lived in Paris I walked absolutely everywhere, vastly preferring being up on the streets to down in the metro underground. It seemed to me quite doable to walk amidst these relatively close destinations. But how one forgets. And how I underestimated the possible (or rather, what could be pleasantly possible as opposed to within the possible). In our life in Avignon, I move and walk a good bit, but nothing compared to my Parisian life, apparently. Oh how my legs are aching today! The boys were pretty out of whack from all that walking too. Jonas said the soles of this feet hurt. Leo complained of boredom, weariness, hunger, and his need for a toilet. It was pretty non-stop. And, on top of that, the fight to hold my hand was a constant for the entire weekend (JP holding the other one). Jealousy, bickering, getting my goat... I mostly kept my cool, but I was an easy target. 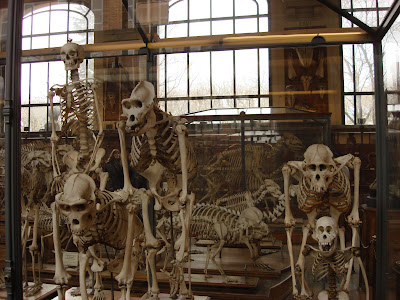 Yes, a weekend outing with my boys is not something I've often attempted. Plane trips, airports, these we know well. The promise of being at Grandma's house when we arrive helps these long waits pass relatively easily. But cultural outings to cities are something I haven't much attempted -- beyond NYC's Chinatown at Christmas. Nor have I insisted they come along for adult outings, drinks with friends, restaurants, etc., So how much of the difficulty of all this stems from lack of experience? and how much is simply Leo's constant need to be stimulated?

That I had planned a short Paris time for us all before Disneyland was a bit hard for them. Leo is still learning that not every moment of the day is designed for his personal enjoyment. Jonas is easier. He can be genuinely physically tired, but he's rarely the vocal complainer that Leo is. A short rest on a park bench eases his weariness, and we can set off again. I'm not the only mother to have such different children. Variety is the spice of life, right?

Personally, having purchased tickets to Paris, I could not not take advantage of that Parisian feel and look and ambiance. Thus, a lesson to Leo: Sometimes we simply go along knowing that the person we're with is having a good time. We graciously accept that what we want to do is not always on the top of the list. Is eleven too young to learn this?

At last, Saturday morning we headed over to the land of fantasy, rides and haunted houses. Once the entry fee is paid, all is available to you. Star tours, and roller coasters, the underground hideaway of the Pirates of the Caribbean and the tree house of the Swiss Family Robinson. A favorite was the battle of Buzz Lightyear and Zorg: mobile video game battles and targets, complete with lazer pistols. The kids were amazed that we were there, and but for the 45 minute wait to get into the old mining shaft roller coaster were pretty well behaved. The directive "separate" seemed to work. Leo was willing to move to JP's side and stop (for a second or two) tapping Jonas, though that didn't mean that Jonas didn't continue to provoke his brother, who felt honor-bound to have the last word/hit/tap/pinch in their never-ending battle. 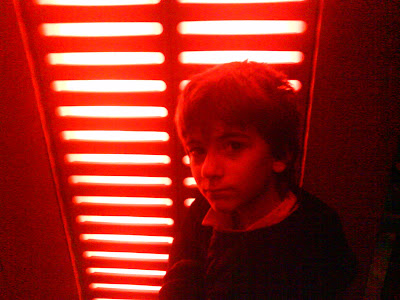 Seeing them happy and having fun was great, and joining them on all these rides (even the loop the loop of the Indiana Jones' Temple of Doom with Leo! -- eyes closed for most of that very long minute) pretty special. As every parent no doubt feels at the end of an extraordinarily exhausting day amidst Disney characters, extremely pleasant and multi-lingual ride managers, expensive junk food and endless walking, please may this not to be repeated extravaganza turn into a really good memory for them.

We had our glitches. After the Dream Parade, during which I fully understood how heavy Jonas currently is when seated on my shoulders, Leo ran off ahead disappearing completely into the crowd. I found him an hour later when the employee he approached called me on my cell phone. I'd been more annoyed than panicked, reassured somewhat by the fact that he knew my cell number. What the Hell was he thinking running off like that? We could never run through these dense crowds and keep up with him. He thought yelling back at us something unintelligible amidst the noise and density was sufficient. However, none of the three of us had heard where he was headed. We had simply an idea of the general direction. So I spent my last hour in Disneyland searching for him, and he me while JP took Jonas to see some ancient Mickey cartoons. Not the best end to an otherwise fun day. Hopefully another lesson learned? I had clung to Jonas' hand amidst all this insanity, knowing full well that he has yet to memorize my number, and if we lost him, I would be a complete wreck. But at eleven, Leo is both old enough and not. It's that ambiguous age that blends a certain amount of reason and responsibility, with the spontaneous gestures of an excited child. What do I expect of him? and vice versa? Each month seems to bring yet another occasion to test limits, at times expanding them is appropriate, at times we refine the terms.

Disneyland is a land of perpetual enjoyment, and employees trained to make sure you stay happy: giving directions, but gently. As I followed and/or led my children throughout this enormous complex I kept thinking of the many specialized professions that contributed to its existence. The roller coaster engineers of course, the fake stone, stalagmite and tree bark masons, but also the waiting line sociologist/psychologist who carefully plotted out 65 minutes' worth of weaving amidst an interesting decor and carefully delineated paths, keeping you unsure how much further you have to go till at last you're there. How to keep so many people pleasant and relatively entertained and content amidst such incredible crowds and potential frustrations? How to fleece them of a maximum of their hard-earned cash? Oh the occasions to pay 3E for a donut or a crêpe, to buy expensive t-shirts and hats, princess gowns, crowns. Clearly, the money behind the endeavor is immense (as we all know), but also the plotting/thinking/calculating down to the tiniest detail. For all this, bravo. However, I do believe this is my first and last visit. 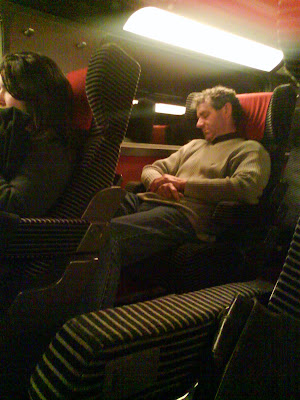 Exhausted, we climbed into the TGV and headed back to Avignon, and not quite three hour trip, arriving sleepily in a cold and rain soaked landscape at 10:55pm. And then, at long last, we were abed. Ahhhhh. 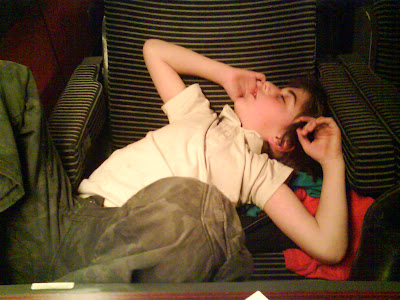 Been there, done that. My kids are 21,21 and 16 respectively and go to Disneyland on their own now. These are good memories but I wouldn't do it again.