JP spent this past Friday at the second day of his biodynamic viticulture class. Now JP has been tending his vines organically since 1984, and he is the son of a vintner, who was the son of a vintner who was... you get the picture. For over 25 years now he has been tending his vines and his vineyards without the aid of chemistry (beyond the Bordeaux mixture copper/sulfur and a couple bio-degradable bacterial agents permitted in organic practices), and with a gradual accumulation of know-how and physical labor.

Organic agriculture requires working the land, tearing up the weeds, and not spraying them with Round-up, etc., It also requires developing the fertility of your land naturally (compost, composted weeds, etc., rather than artificially punched up nitrates). A simple concept, right? But it is extraordinary the level of skill and knowledge that must become ingrained as a man (or woman) spends years going over his land with a tractor and plough, turning up the dirt, taming the greenery. There is art in this act. For this reason, many of JP's colleagues will be coming to his hands-on weekend program for vintners who wish to convert to organic practices. (22 April this year).

If you've used chemistry to keep weeds at bay for years, your vines have most likely been developing their root system close to the surface. Thus, if tomorrow you decide to go into your vineyards and physically tear up the abundant weeds, you may also rip out the roots of your vines, and decimate your winery. Not a good idea, hm? And, if you think a machine can do this work alone, even one specially designed to do so, think again. Not every vine has the same twisted form, not every vineyard is planted on flat land. It could be a very expensive bet to trust a machine to be sufficiently sensitive that it removes only the weeds, and doesn't hurt your young vine? 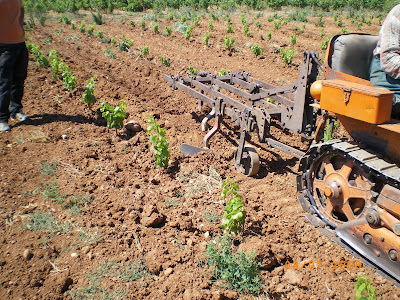 There is as well, a question of timing. At which moment is it most propitious to pass the plough or as the French say, to griffoner (scratch the soil)? An understanding of the local flora, their growing patterns, will help. But even more important is intimate knowledge of your soils and their reaction to humidity. Clay rich soil can be turned over from three days after a rain storm to eight. Too soon, and the tractor gets stuck, too late and the soil is too hard for the machinery to penetrate it. A sandy or pebbly soil can be ploughed nearly anytime, from a day after the rains to a month.

Over time, the act of ploughing up the weeds (and leaving them to mulch around the roots of your vines) will in itself enrich your land. But, it is recommended to go slowly during a conversion from herbicides to ploughing, i.e. every other row of vines the first year, and with care. 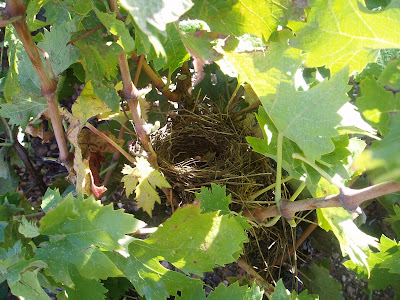 a nest nestled in the vines.

Currently, organic wine in the US has a mixed reputation, in part because for many years certain vintners attempted to make wine with no sulfites at all -- which is nearly impossible -- and made quite a lot of wine that had a very short shelf life, couldn't travel and yes, disappointed many excited by the prospect. It is possible to make wine without sulfites, but those who do it successfully have found the trick of leaving in the gasses their best bet, and this tends to render a fizzy mix.

In Europe, the organic legislation for winemaking permits using sulfites, but at a much lower dose than is standard. This guarantees that the wine can travel, be cellared, and be enjoyed for the proper life-time of the wine. 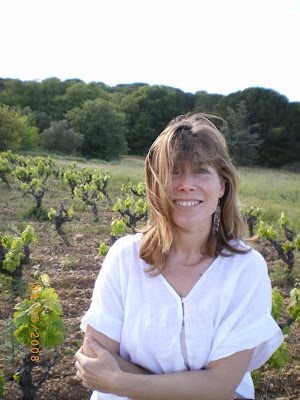 Voila, a bit of history. So, knowing that many a chic winery has converted now to biodynamic winemaking practices, (with my strong encouragement) JP sought to learn more of this discipline, not necessarily to change his own practices, but to better understand his colleagues who've chosen to do so. (Think Bonney Doon in California, Château Beaucastel in Châteauneuf-du-Pape, Montirius in Gigondas, Château Romanin in Les Baux de Provence...).

Briefly, biodynamic viticulture stems from the same origins as homeopathic medicine, and the Waldorf schools -- Rudolf Steiner. You can easily look it up on Wikipedia for details (or look at Bonney Doon's web site, which is very extensive). It observes not only the solar cycles, and the seasons, but also the lunar, and the planetary, and the astral. There is a calendar that many follow (but others dispute) which calculates root days, flower days, leaf days and fruit days. Hence there is a guide for when to plant for which result, what time of day to water or work the earth, and much much more. Rather than the traditional copper sulfur treatments used by organic vintners, there is an elaborate range of preparations that are dynamised at infinitesimal concentrations and sprayed on the vines at specific moments in the year and their growth cycle.

Amongst the concepts that are new and interesting for many are the peeled crystal or well aged manure buried in cows horns for six months, then disinterred and dynamised.

What was particularly interesting for JP in his discussion yesterday was the approach of the instructor, himself a biodynamic vintner in Provence. A Swiss who also follows the anthroposophic vision of life as put forth by Rudolf Steiner, he applies his rich education and experience to his vines, in addition or alongside the strictures as presented by Rudolf Steiner and refined by his disciples since. There are many cycles to take into consideration, and on occasion they will be in conflict. However, there is no doubt that the cosmogony has an influence on the growth of plants on our earth. The trick is to apply this knowledge skillfully. As JP has noticed, he can turn over the earth and remove the weeds in one vineyard parcel, and there will be little growth afterwards. However, in a similar parcel that he ploughed two days later, there will be abundant vegetation in the following weeks.

The instructor openly discussed the complexity of the biodynamic system, and its many conflicts, assured at the base of its many virtues. But, he also stressed that the system be applied judiciously by a vintner who is first and foremost a skilled farmer, who knows intimately the land he works. Let him first master organic farming. Then, by all means look towards biodynamics to dynamise his land even further. But be careful, even if the published calendar says it is a "root day" or other, if it rained the night before, it's probably best to not go into that clay rich soil. Don't blindly apply directives that contradict your good sense as a farmer.
Publié par Madeleine Vedel à l'adresse Saturday, April 04, 2009