Life and Death in the world of farm animals 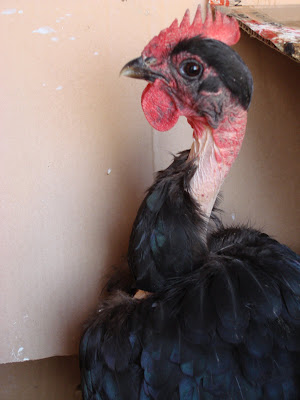 All excited, I followed a mother from school to her house 45 minutes from school to pick out chickens for the Mas. JP had been with me two weeks' earlier and seen the lovely chickens from her brood hen at my friend Alison's. He'd found them quite lovely and was very interested in the price (free, with gift). So, I called, I organized, I nearly completely zapped my rendezvous -- happily she came to me in the parking lot Friday morning! -- and off I went to collect some chickens.

First of course, I had to catch them. Aie yaie yaie. I forget sometimes to what degree I'm a city girl. Oh, I can climb trees, play in dirt, shovel out a horse stall, saddle and bridle a horse, wash a dog, find mushrooms under pine needles.... but catch shy chickens? Suddenly I wondered if truly, that greased pig contest would be any easier.

At last we cornered a few in the pen and succeeded in grasping some tale feathers and pinning them down into a carton. One rooster and five hens of various colors and styles.

I was humbled and proud at the same time. I'm not completely pathetic... just a bit leery and hesitant with age I think, yet often kafutzed by my inner child. 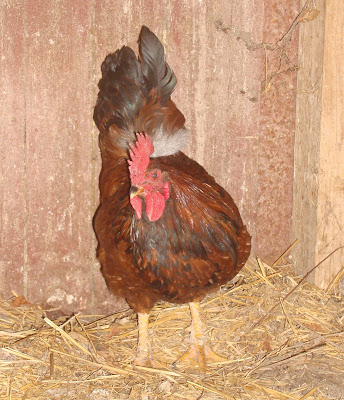 The chickens lived happily in a large cardboard box throughout the day in the back of my car till I got to the Mas. Whereby we released them into the poullailler which had normally been fixed up by JP's helper.

Immediately the dogs were very interested. They got a wacking for their interest, and we hoped had learned from it. In any case, the plan was to keep a close eye on them and prevent damage in the time it took for us to reinforce the perimeter of the pen.

But, the best laid plans of mice and men....

The next morning, it could have been a scene from Jemima Puddleduck. The dogs got into the pen, and there was damage. We found feathers, and one dead buried a distance from the pen. I was crushed. Half my chickens were gone in one fell swoop! And the rooster too? 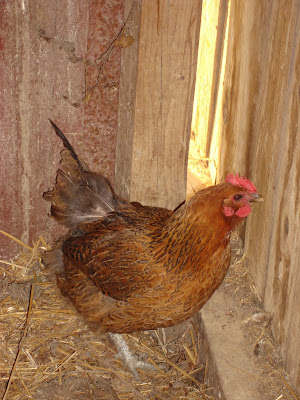 So, we got to work, pinning down the fence all around, to make sure no dog or fox would slip under the wire. And then we cleared all the field grasses and branches and wild vines and more from the perimeter and put in an electric fence at the height that our four legged friends would best encounter. A long morning's work. But well worth it. A few yelps confirmed that the dogs had discovered the electric charge, and their subsequent distancing of themselves from the coop vastly reassured me.

And then, is that a rooster we heard? The day was not a total loss. We found our handsome rooster and corralled him back to the coop with success. Now, perhaps another one or two has saved herself in the woods and will come back to the rooster's call?

The day before, I'd learned of the loss of the baby goats (not those we saw born, but those from the night before). And this day, the natural instinct of a few house dogs did its work on our feathered friends. 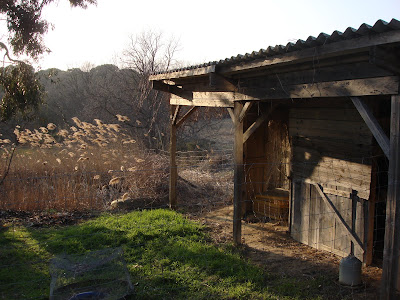 As JP told me, when you work with animals, you learn to accept a certain level of loss. It is up to us to prevent it to the best of our abilities. But we are not perfect, and mistakes occur, and nature lets you know quite quickly to wise up and do the necessary.