Translating for a Cause

Through a friend I was contacted to interpret for the FAITES SANS OGM festival in Le Thor. I said yes, put aside the dates, and went about my life. Then I looked again and said oops, who is that? oh yes. That's why I'm busy this weekend.

I managed to re-ignite the contact and confirm times, payment (what they could afford) and place, etc.,

And off I went on Sunday -- they were set on Saturday apparently.

And what a delightful experience! I was there interpreting during the speeches of Percy Schmeiser (the Canadian farmer who had such a terrible experience being sued by Monsanto for theft of their patented canola plants, which had arrived by the wind from his neighbor's land! -- though in the end he won the battle) and Vandana Shiva, the mother of all seed preservers in India.

These two have worked for years to combat the ever creeping presence and power of Monsanto and the world of genetically modified seeds. They have worked to preserve the ancient varieties of seeds and the ancient ways of farmers. They have stressed and explained why organic and traditional methods get the best yields, nourish the land and feed families and communities. They have spoken at the International Monetary Fund, the UN and far and wide dispelling the myths propagated by Monsanto as to yields (far below what was predicted so confidently) use of toxic pesticides (far over what was predicted) and the reality of organic agriculture.

These two 'grosses pointures' as we say here (super VIP) were joined by their Mexican colleague (for whom I did not translate, but who was splendid and fascinating), Ana De Ita who has been defending the varieties and bio-diversity of the local corns of Mexico against the infiltration (illegal during a moratorium banning OGM corn!) of Monsanto's GMO corn into Mexico.

I had a grand time, learned oodles, and managed to convince the conference operators that they should hire skilled translators more often. It is a truism that many many people speak English in France. But, sadly, this does not always mean they can retain information in their heads for a few minutes, and repeat it in coherent sentences for the audience to follow. Nor is a basically good vocabulary always sufficient. And, well, just take a look at many a translated menu...

All this to say, I will be keeping in touch with this group and am likely to work with them again.

What's ironic is that I actually knew a handful of the actors in this festival -- from the attaché for the Green Party in the mayor's office of Le Thor (from Tango) to two of the volunteers and adherents to Folle'Avoine, the non-profit that helped put this festival together (also from Tango), to one of the civil representatives for the safety of humanity (from the Steiner School), to a number of faces from the Conféderation Paysanne (from my years as companion to an organic vintner).

And yet the job offer came via a friend in Avignon (thank you my dear!) not at all from these numerous individuals who've seen me regularly in the past few years. Apparently, I have not been particularly open or demonstrative as to my interpreting skills... or they're all simply so accustomed to communicating with me in French that they forget that I'm fully bi-lingual?

Ah yes, I've neglected to say that the day finished at a wonderful tango spot, and shoes in hand, I danced a lovely bit before heading home to my kids, my normal life, and an early morning the next day.

I'm rather in awe at how many aspects of my life came together on this day: Steiner school, tango, nutrition/organic agriculture/life-style, translating skills (including simultaneous), and my accumulation of knowledge on this topic (thank you Michael Pollan!, OCA newsletters and more!).
Publié par Madeleine Vedel à l'adresse Monday, February 14, 2011 5 comments:

A special place not far away

A special day, a quiet day, a day of discoveries in my own back yard. Time to wander, explore, experience, be. For once not running, for once not doing a thousand errands, for once not talking a mile a minute, for once...

And beauty appears, startles, enriches. A private and most special moment. 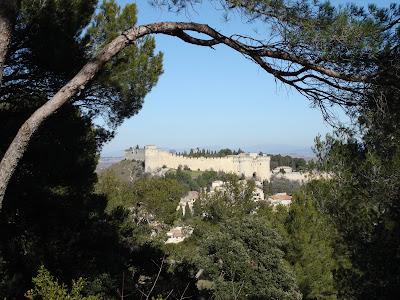 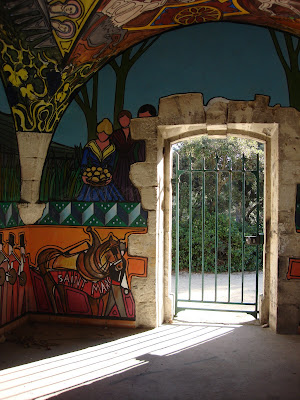 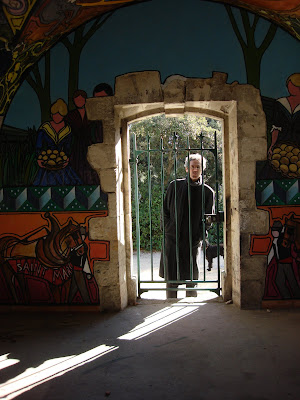 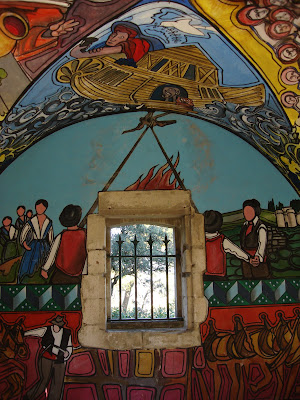 As you might have noticed, I'm having a difficult time finding time. I seem to have mislaid it somewhere (or is it mislayn?). Yes, I'm feeling busy, and when I'm not busy I'm feeling like nourishing myself with yoga or a meditation or a walk, or with being active putting the house in order, clearing away dust and debris, pruning the garden.

Yes, the garden is calling to me. Hark, the sun is out, the wind is away, come and play! And so the old tomato plants are at last removed and in the compost. The garlic cloves are planted. The rose bushes are pruned, ditto the cherry tree (very judiciously). The bits and pieces blown about the yard by the many days of Mistral this winter have been raked away. And I'm thinking, I need chickens! It's time!

So, when to find that moment to head over to Cavaillon where they sell chickens? or do I go down to the Arles' market? or do I order them over the internet? Friends with chickens don't have any for me at the moment, unfortunately.

All aswirl, when I'm not being calm and centered and chilling out that is. 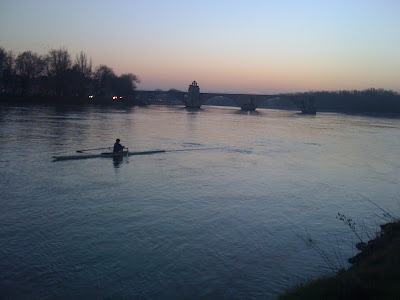 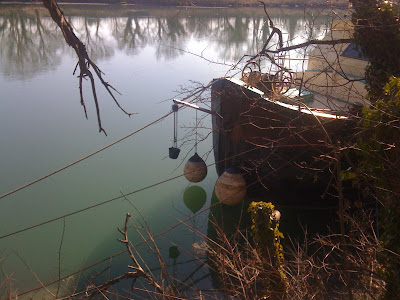 And then there are the evening walks

Brisk evening walks in chilly but bright weather, and a gift, light, colors and more. Nearly alone (but for the lone runner, dashing away quickly from Filou's protective barking and, ahem, tendency to chase them) I take it in. Beyond meditative, it's spiritual. 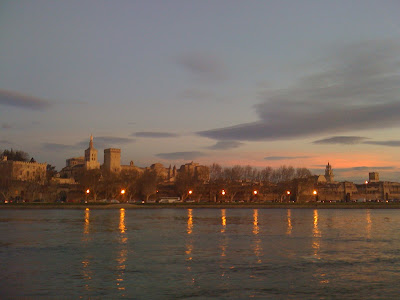 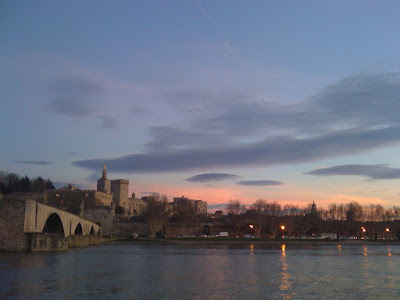 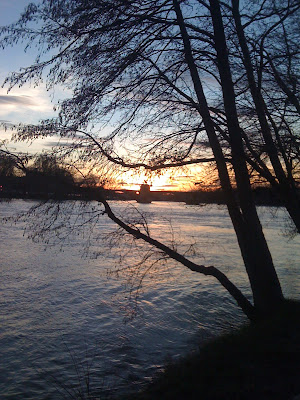 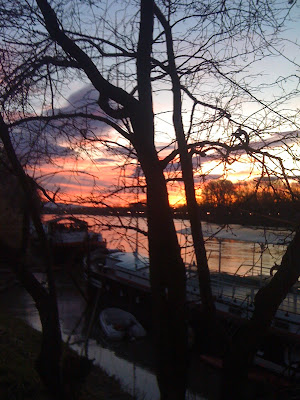 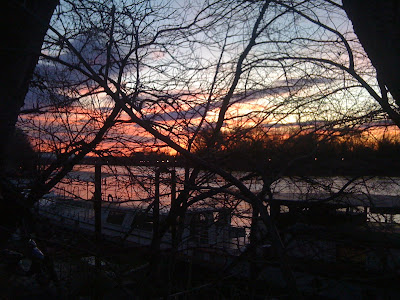 Somtimes getting up early to bring your kids to school has its advantages, like when Nature decides to be splendid.
Publié par Madeleine Vedel à l'adresse Wednesday, February 09, 2011 No comments:

I think this is one of those moments when serious gardeners prepare their land and get to work. But when I listen to that wind whistling outside my windows, as I sit huddled in three sweaters beside my wood stove, as I sip my hot tea and read or write or... I'm in complete disbelief.

Yes, I should perhaps be out there tearing up last summer's tomato plants, plowing back under the remains of roots and weeds (or tearing them out), and who knows, maybe I've even some potatoes that survived the winter freeze (shows what I know, or not, of how potatoes work, hm?).

I read that this is the time to plant garlic and onions. Hm, nice idea. Ditto the time to lay out manure and compost and enrich the soil. Ahh, yes, I could give my goat cheese maker a call and see if there is more nicely aged goat turds I might receive.

Late November I planted Mâche leaves -- still looking good and still giving me a few dozen leaves for my salads -- and broccoli. This latter is basically a once a month (if that) source of kale leaves for a sir fry. I've 10 plants, and not a one looks particularly interesting or substantial enough to harvest. I wonder if and/or when this shall be? Or maybe I should be watering them more?

I simply have to confess that when the weather is nasty, I turn inside. I forget I have a yard (it's out back in any case). I only go out to get wood off the terrace for my stove. All my laundry is hung on the rack in my bathroom. I don't have chickens as yet to populate my chicken coop, and I manage to delegate nearly all trips to the compost pile.

A fair weather gardener? I'm afraid so. No doubt, if and when we truly have a gorgeous day, and I'm not galavanting about, or teaching, or correcting tests, or shopping, or cleaning the house, or getting the car fixed, or making muffins, or writing a short story... I'll be out there digging, raking, cleaning, and putting order to my small patch of brown and green. Truly.
Publié par Madeleine Vedel à l'adresse Wednesday, February 02, 2011 2 comments: