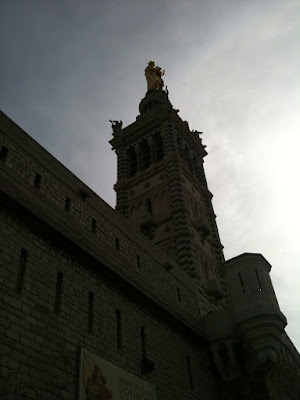 Marseille seems to be, as they say here, un incontournable. And yet I don't know it as well as I ought. Happily, I've friends who do and with whom I'll be exploring it further. 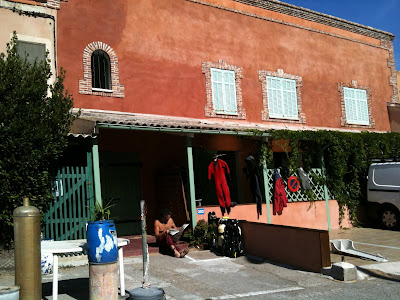 In the meantime, simply learning how to avoid horrible traffic jams is a serious trick to be mastered. Getting off the highway at Estaques and not in anyway being persuaded to go back up to the viaduct, no matter the many signs directing you to the View Port in this way, are key to the game. 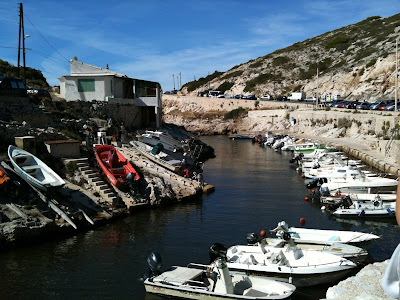 And, if going that way, best to perhaps not be there on a major international market day. Ah well. No one's perfect. Should this happen, and traffic be beastly, parking non-existent, you can always just keep on going, past the Vieux Port, past La Corniche, past the statue of David (yes) to the East to the fishing villages nestled in the Callanques but 20 minutes out of Marseille. Magical little spots that are unexpected, minimally visited, and where you'll be served a very good Bouillabaisse at a price that won't be startling or painful. 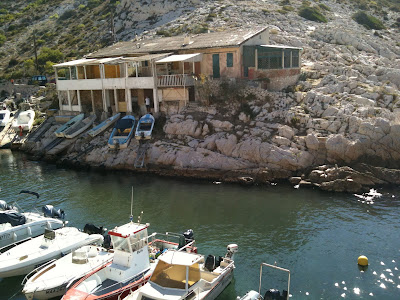 Erick took me to these little villages oh so long ago. We brought along Carrie, our first au pair. I've a photo of Leo walking naked into the water from the boat slip that I believe my father's wife took. I've memories of Jonas not nursing my garlic-infested breast milk when we visited with a group of Canadians in February... 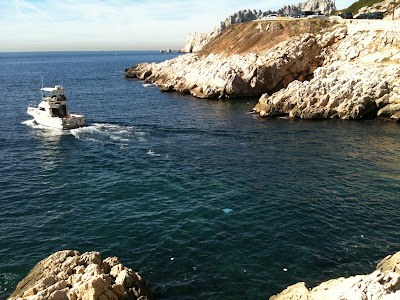 It had been years since I'd been out to these magical sites. Perhaps the last time was with a young woman who'd just lost her pocket book, wallet and everything. We'd brought her to the American Consulate in Marseille to get a new passport, and had to wait till the afternoon to pick it up. So we headed out to Callelongues for lunch. 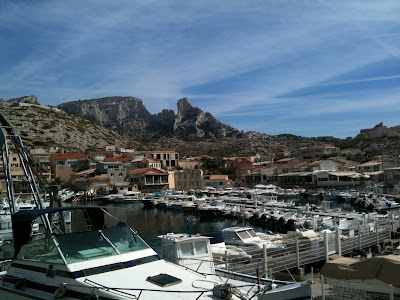 Every time I see the rickety shacks on the steep rock face I yearn to live in one, hidden from the world for a week, a month, a season, and write. What will I write? I don't know as yet. But somehow, being by this extraordinary blue turquoise sea, these rocks that lead to yet un-chartered (by me) hikes, with the simplest of restaurants beside nestled in this tiny village... I am inspired. 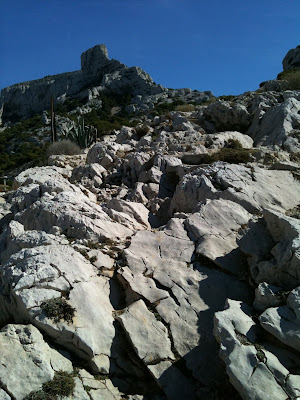 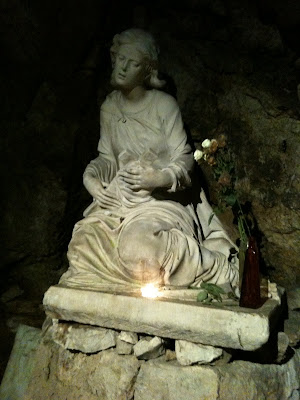 There was a convergence of circumstances that brought me to the Grotto of Marie Madeleine in Ste. Baume.

Friends from the US and FP (Feminine Power) came visiting on a pilgrimage tour. They'd been to the grotto the morning before our dinner and were brimming with the rich spiritual moments they'd spent there.

And then new clients expressed a desire to go there, to find calm, nurturing, spiritual healing.

I expressed that I would be up for taking them there, but that it would be rather 'the blind leading the blind' as I did not know it well. They leaped at this option, and so I spent my time on the internet researching and most of all assuring myself of the route there, the distance, strange curves, time, etc.,

Happily I'd printed all this out as my IPhone, a gift from a friend in the US, has yet to figure out that I'm living in Europe and doesn't really want to place me here. As such, it is nearly useless on the map app. Ah well, perhaps it simply wasn't a moment for cutting edge technology. 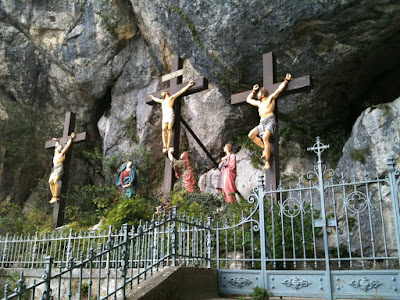 We drove out onto the highway heading East. Beyond Aix we left the fast and furious pace of those on their way to Nice and Italy beyond, and shifted to smaller roads bringing us to Ste. Baume. From there we headed out into the hills, winding, climbing, and squirriling about till we reached Plan d'Aups Ste. Baume where the Dominicans had rebuilt the Hôtellerie by the side of the road, where the path commenced. From here as well commenced the Chemin des Rois through the untouched woods. 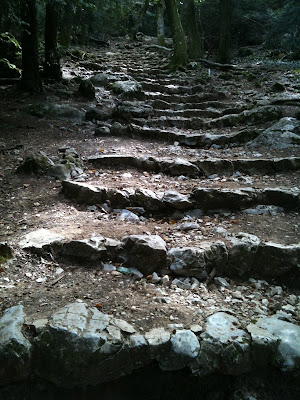 It is a relatively easy hike, through these virgin Provencal woods up to the grotto. Approximately 45 minutes for an average walker. It does get steep at places, and there are beautifully arranged stone stairwells to make the way easier on the ham strings.

Once directly below the grotto, any pretense of untouched anything peels away and you find yourself before classically cut stone steps, images of a Dominican monk signalling silence, an impressive facade, and inside, an elegant carved stone alter.

Though the grotto was completely desecrated and vandalized during the French Revolution -- thus preventing us from seeing what the kings from Charles II of Anjou through to Louis the XIV gifted to this most popular Christian pilgrimage site through the ages. However, since its reopening and restoration, there are now four impressive likenesses of Marie in marble to be admired and prayed to. 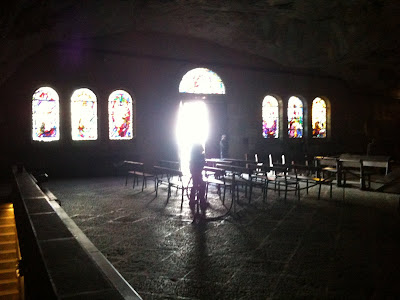 And so we lit our candles, prayed and gave thanks, listened to the dripping in this moist space, shared the silence with fellow pilgrims and went back out into the fierce light of a Mistral-blown day.

Cold and in need of a little something, we tucked into the abris des pélerins, helping ourselves to a bit of hot cocoa and coffee, and an extremely pleasant chat with a local priest from Estaques, a village to the West of Marseille. 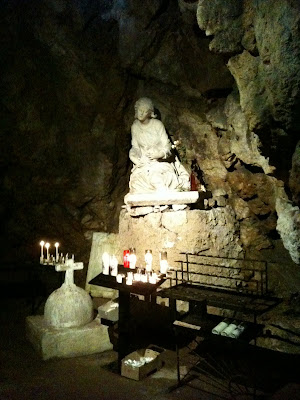 From our hill-side perch we climbed back down and headed through the hills to the quite magnificent Basilique de la Madeleine in St Maximin. Here, the Dominicans went quite a bit further. Here the relics of Marie Madeleine are kept in the crypt (her thumb-printed cranium, the print being from Jesus when he bayed her rise), and here you can feel the imposing importance of herself and St Maximin, both put in the barque without oars by the Romans, twenty some years after Christ's crucifixion, and landing in the Camargue with Marie Salome, Marie Jacobi and Marie Sara. From there they dispersed each to his/her corner of Provence, here to live out the end of their lives. 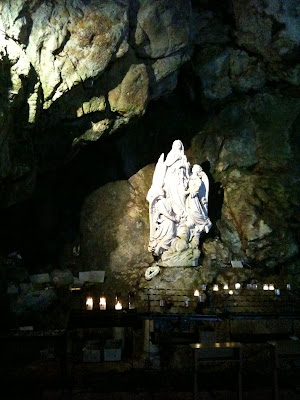 The local tale says that it is in the grotto of Ste. Baume that Marie Madeleine lived her final years, and it was as she was descending the path that she died. The angels came to lift her body and bring it to St Maximin where it was interred with respect and adoration. When Roman civilization came to an end and the Visigoths came south in the 5th century, the remains of Marie Madeleine and St. Maximum were buried beneath the basilica, hidden from view. Charles II of Anjou, Comte de Provence, in the 13th century disinterred them and brought them back to light, initiating centuries of devotion and pilgrimages. 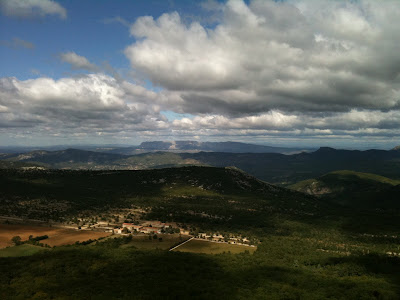 A word to explain my absence

T'is been a busy year. Somehow, somewhere, I trailed off and simply stopped writing. I wouldn't call it a writer's block in the true sense, more a time for meditation, reflection, and discretion (or the discovery of such). I am not naturally discrete, and I do benefit hugely from meditating and reflecting. As such, I've simply had more quiet moments, held my own counsel, and cultivated mon jardin secret, as we say here.

But I do like to share, and perhaps with a slightly different voice, perhaps less intently and frequently, I will continue to do so.