Ratatouille from the potager

Ratatouille. It's rather Proustian for me. Childhood memories of visiting France with my family, in the heavy summer heat of 1976, going from one friend's house in Garche (outside of Paris) to another's in Biot (Côte d'Azur, by Antibes), and on to Marseille, ending up at my godmother's in Rennes. In each home we were welcomed with that week's fresh (or day-old) batch of ratatouille. As my mother (the French professor) worked on my pronunciation of the French gutteral Rrrr and the quite particular ouille (oooiya), we enjoyed this most colorful and traditional dish (post discovery of the new world, but hey, traditions are made over a short few centuries, right?). 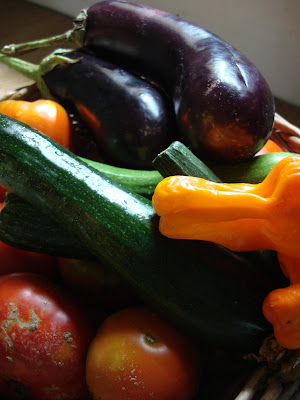 My brother and I, like mimicking apes or cuckoo birds, laughed and played with the marvelous sounds of this word. It truly is a marvel of linguistic beauty. rrra ta tooiya. And the French do care so much about getting the proper accent of their language. My brother had the best accent of we three, Mom always remarked. Though these days, we rarely hear it. He made some valiant efforts to communicate with Erick, the time or two we overlapped in Michigan these past years. And he certainly still has a strong vocabulary. He was teaching his sons the word libellule just the other day (dragonfly). 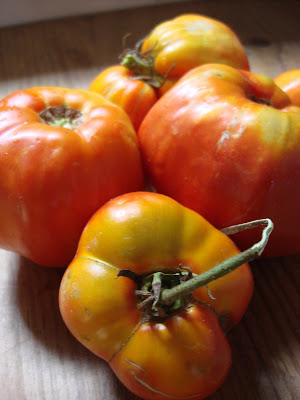 Every night, and often at lunch as well (if we were there and not off doing some touristy things ourselves, leaving our hosts a bit of peace and quiet during our brief invasion), we were served the ratatouille, till there was no more in the pot. One night we would have it warmed up, with pasta or rice alongside. Another day it might be served cold, with ham, pâté and good country bread as accompaniment, the latter to soak up all those good juices. Likely the best of them all was prepared in Biot with marvelous and fully ripe vegetables from their garden, or possibly from the little market stalls down in the village. Sweet, tart, dense, textured, savory, garlicky... I can see and taste it now. 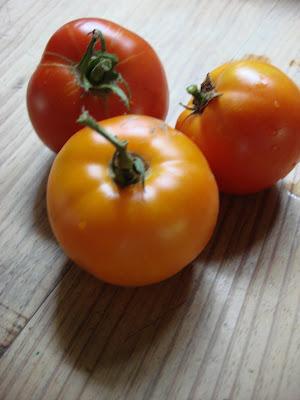 Happily, by the age of ten I'd gotten past some of my worst food phobias, and would now eat strange things like eggplant and zucchini when cooked in such a dish. I'd been rather awful at the age of five, the time of my first French voyage. If I remember right, I'd even had a random and strange trick of biting and breaking any glass I was served. This only lasted a week, but I have this memory of being unable to drink without biting down. Rather akin to my son, Jonas, during his ninth month of nursing... 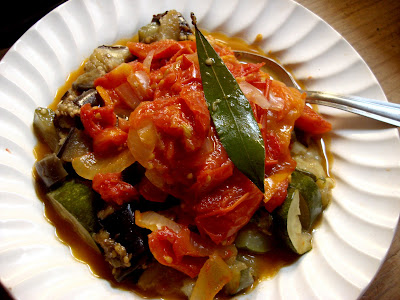 This morning after a leisurely wake up time (which truly, isn't appropriate in this land of mid-morning beastly heat, but I'm still just a touch in my Northern Michigan habits), I cleaned up and headed out to the vegetable patch. After tying up many a tomato plant, I collected a dozen gorgeous tomatoes, six or seven good sized zucchini and eggplant each, a handful of tiny orange bell peppers (not sure how hot these are, I only dared put one into the pot. For the moment, the others are highly decorative). There are still plenty of tomatoes ready to ripen on the vines, though due to a run-in with mildew their leaves are rather scraggly, which could prevent full ripening. We shall see. I remain ignorantly optimistic.

And to work on the ratatouille. Since living with Erick, I've opted for cooking the vegetables in three batches: the eggplant and zucchini are chopped up in even sized chunks, and put, the former in a casserole, the latter in a large deep-dish frying pan, with some olive oil and just enough water so they don't burn and will soften a bit (barely a half cup), a couple bay leaves, and a sprinkle of salt. I cover the pans to maximize the softening period. When the water evaporates--15 to 20 minutes or so later -- I let the now softened vegetables brown in the oil which has reappeared now the water is gone, stirring just enough so they don't stick. I then remove them from the heat and put aside.

Meantime, I sliced the onions and pepper, putting them in a deep casserole with olive oil to sweat, added in my tomatoes (their arrival stops the onions from browning), 3 or 4 more bay leaves, 6 cloves of garlic (at least) and another sprinkle of salt. The tomatoes, ideally, I'd let simmer for hours till they reduce and reduce and reduce to their sweetest potential. However, having already heated up the house (a sin on such a hot day), I turned off the heat beneath the tomatoes, to put it back on this evening once the windows are open again, letting in cool air to balance the heat put out by the flames beneath my pot. Thus, our lunchtime version was not the apex of flavor potential that I believe tomorrow's will be.

The first serving of the dish is thus a marriage of three distinct flavors. However, as the week progresses (always make enough to have lots of left-overs), the flavors merge and concentrate into a marvelous unity. And then, it could top a pizza, or crostini, be baked with cheese on top, or added to a lasagna. I had one au pair who even passed it through a vegetable mill and put it atop some spaghetti, persuading my son that he was only eating tomatoes (she was a bright one she was). 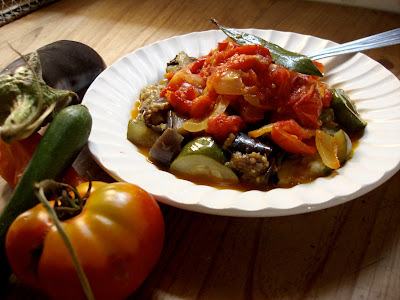 Ingredients: 5 eggplant, 5 zucchini, 10 or more good sized tomatoes (the extra can always be saved as sauce), 3 onions, 6 cloves of garlic, one bell pepper, plus sea salt, a cayenne pepper (if you like) many bay leaves.

Cooking time: two hours plus plus (if you count your slowly simmering tomato sauce on the back burner).
Publié par Madeleine Vedel à l'adresse Wednesday, August 19, 2009

Julian made a ratatouille yesterday from our garden supplies and added a little balsamic vinegar and...a spoonful of ground coffee.
wow.
We're flying out on Friday. Really looking forward to our week in Provence and then Brittany.

very interesting to read ....thanks for giving this kind of blogs,thanks...
Samantha
Home Security Systems no CREDIT CHECK everyone is approved

Coffee? hm. I had put a bit of balsamic in my cold ratatouille yesterday at lunch and yes, it definitely adds a kick. But coffee... I'll have to try that. Enjoy your trip! You're coming at a perfect time. The terrible heat should have passed and the pleasures of early fall (safer shell fish) and full market stalls await you. Enjoy!