Back at the truffle market at Carpentras, the oldest market of truffles in France (or the world no doubt - I was told the date of 1155), located in the region where the best and the most truffles traditionally have been found. This being France, and most particularly Provence, anyone who has read a bit of Alphonse Daudet's Tartarin de Tarascon will recognize the extreme dimensions of all things of this most beautiful place in the world (is there another? Many Provençaux never range more than 50 kilometers from their birth place). From the annals of History:


Man has known & relished the truffle since High Antiquity; she used to be celebrated for her aphrodisiac virtues. However, during the Middle Ages, the truffle lost its luster and was associated with evil and the devil. At that time it was food for pigs (sound familiar? - see the story I was told yesterday of how to make the best blood sausages...), pigs being considered the most un-pure of animals by the Catholic Church. It isn't until the end of the Middle Ages, early Renaissance that the truffle was rehabilitated by the Popes, then based in Avignon, who brought it back to his banquet tables. 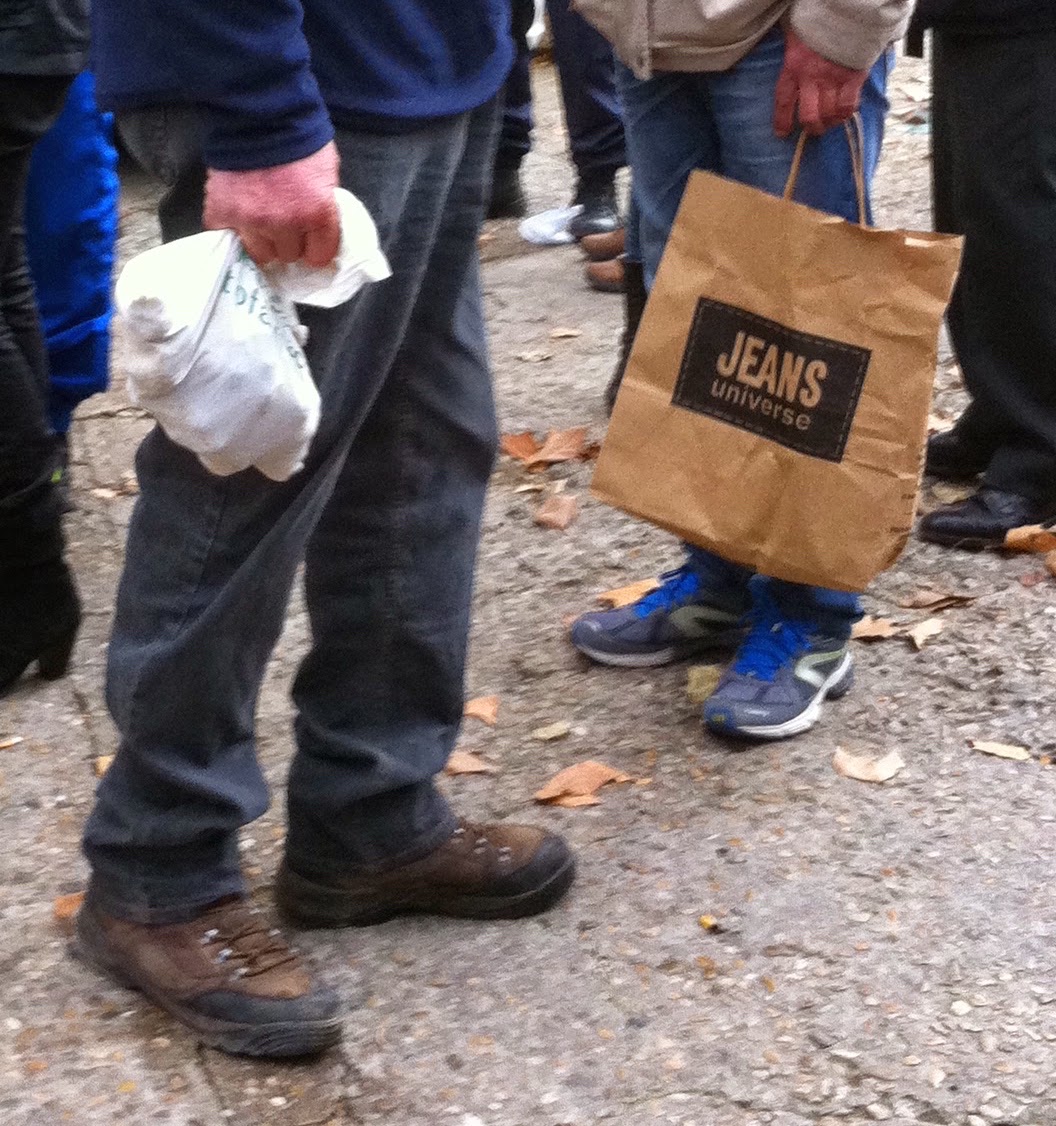 We were three today to visit the market, myself, Erick (my former husband) and Eric (my colleague chef from Traverse City). As we arrived, the wafting scent of truffles began to invade our nostrils. Happily, none of us were suffering a sinus attack.

This is very masculine world, though the rare woman rabbasier (truffle hunter/grower) and courtier (official purchaser) mixed amongst them. Elegance is a rare trait (though a few of the courtiers sport their elegant leather jackets and snappy felt fedoras). Much as I try to avoid the clichés made so famous by Peter Mayle (and more honestly Jean Giono and Marcel Pagnol before him), we had entered into a group of relatively diminuitive, gray-haired men, in non-descript jackets, work boots and closed expressions. Small groups of them clustered about the square, slyly opening up their sacs, meeting with colleagues, making small deals before the official market began.

I found myself beside an elderly man, (or did I sidle up to his elbow?) with a slight shake to his hand and a bushy white mustache. Putting timidity to the side, I asked him how his harvest was this week? And compared to the week before? And what is the going rate? How's it been this season? Where abouts did he hunt his? Oh, the Mt Ventoux? Hm, and might I take a look at his? Ahhh and how much are in that sac? I felt them carefully for firmness, noted that the dirt had been rubbed off, and made my own little deal. 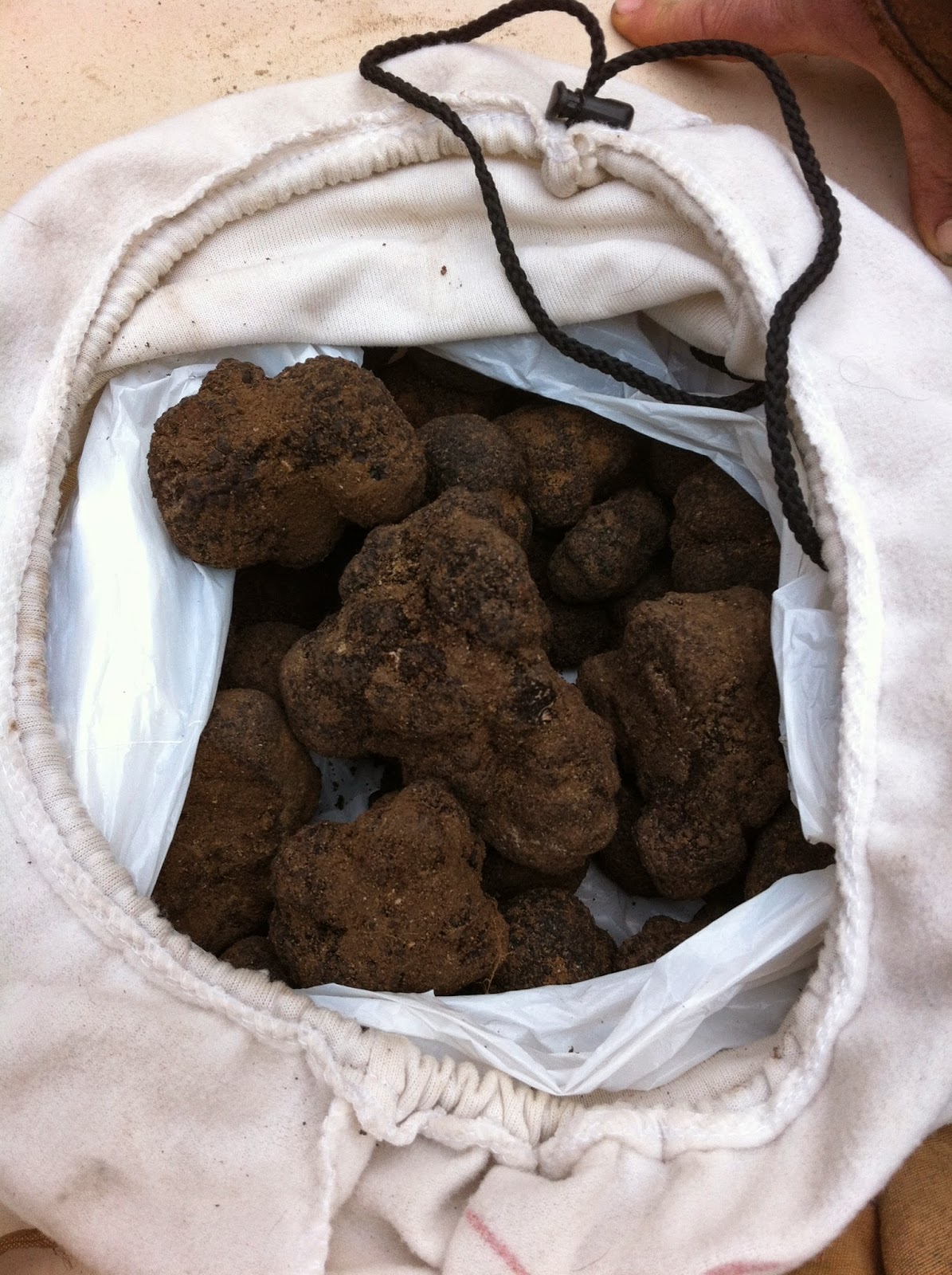 Officially, you cannot sell or purchase less than a kilo of truffles if you participate in the official market. Thus, if your sac is a bit on the light side, making a discreet deal before (or after) makes good sense. And, if you catch someone who's eager, foreign, a bit out of the loop (ahem), you can make a bit more. i.e. We purchased 280grams for 80Euros before the market based on a range of 300Euros to the kilo. In the end, the truffles sold today for between 190 - 240Euros/kilo. So, we were far from ripped off. But, had we waited, we might have had more for less. (There's always next week). 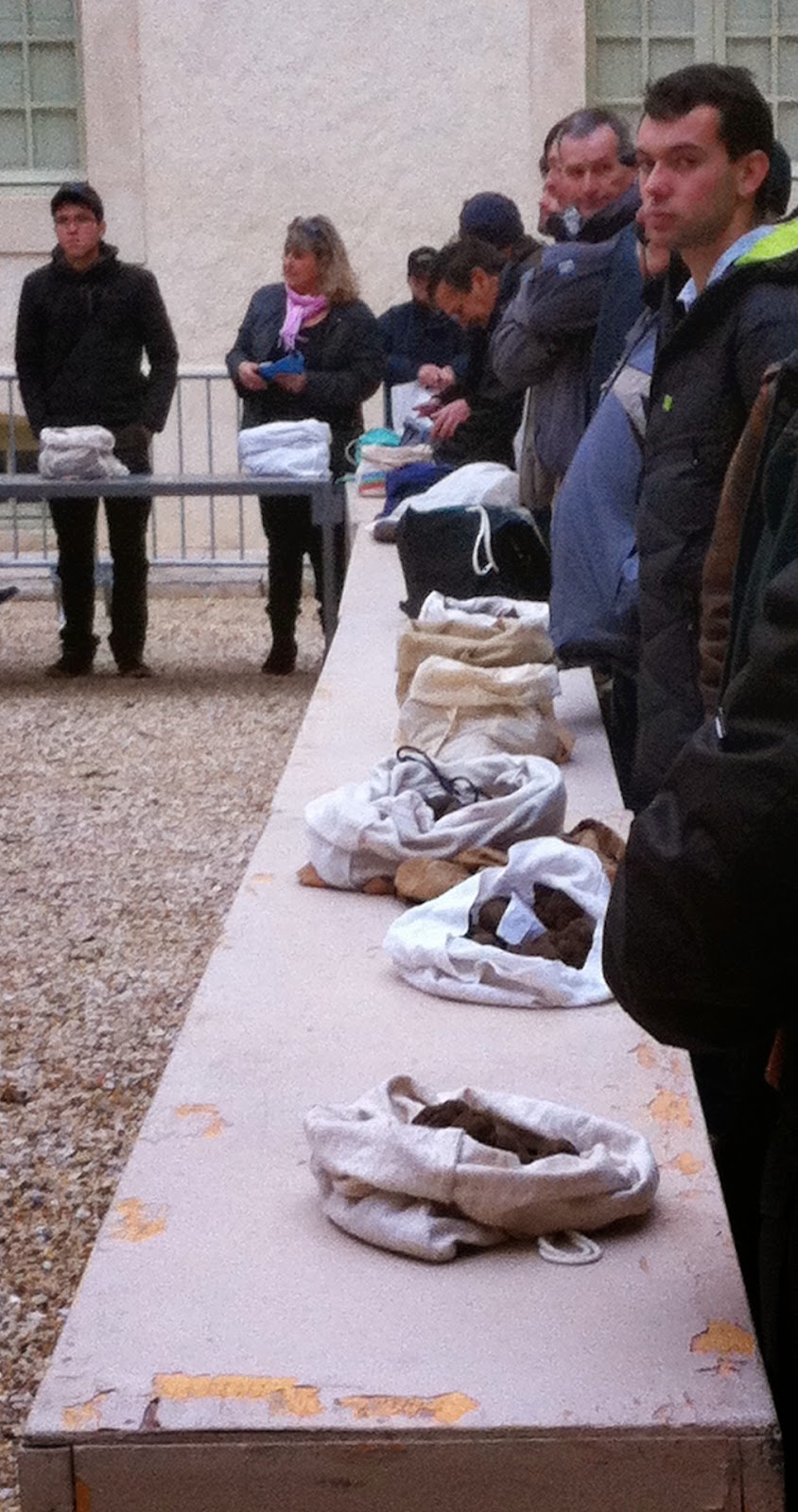 At 8:50AM all move to the interior courtyard of the Mairie, the official heads of the market arrives, parking his car in the reserved spots. The police are there, blocking all further traffic. Barriers are put up around the square of tables. All the sellers enter and prepare their bags. At the sound of the whistle, 9AM sharp, the courtiers enter and the market begins. 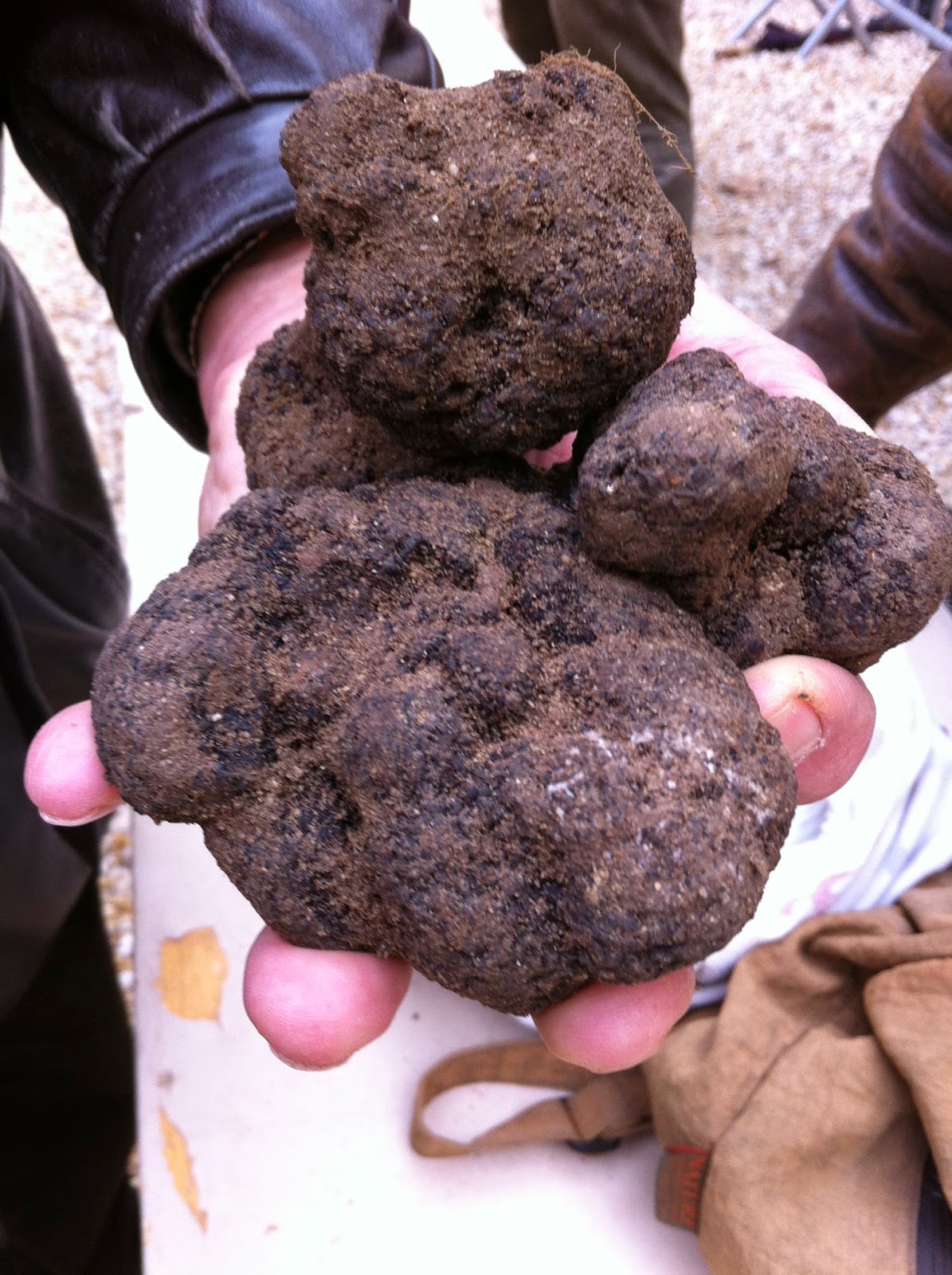 Today's market went quietly and slowly. Even here we feel the effects of a poor economy, ruffled feathers, minor fears. I addressed on of the official market men (a colleague Erick remembered we'd been presented to years before by a colleague from Châteauneuf), and opened my eyes wide, nodded my head in encouragement, and got a wonderful earful of history and tales. Many's the time, he said, that had he turned his back on the market, there'd be nothing left 10 minutes later. But, today, more than a half hour passed, and still, there were a couple sacs on the table. It wasn't a great day for the sellers. The courtiers, however, had their pick.

As we departed, my new friend gave me some good addresses, private phone numbers and suggestions for the weeks to come. And next week, I'll bring my better camera :-) Now that he knows me, in I'll go, and respecting the unspoken rules not to take portraits (darn!) I'll be permitted to snap a few up close.

There are still spots left in my Winter Truffle Tour in 8-15 February
http://www.cuisineprovencale.com/winter-2015/

And note that with the dollar getting stronger and stronger, I've adjusted the prices down on the web site to reflect the shifting value.

Welcome back Madeleine, lovely to see you back on this side of the Atlantic. Truffles, yes, a world of its own. Have you ever been to the truffle market in the small village of Richerenches? It's one of the top places to go!

Thank you! I've yet to get to Richeremches. I'm afraid I've been a Carpentras purist. But I'll get there someday, if not soon!