Truffle hunting in the snow 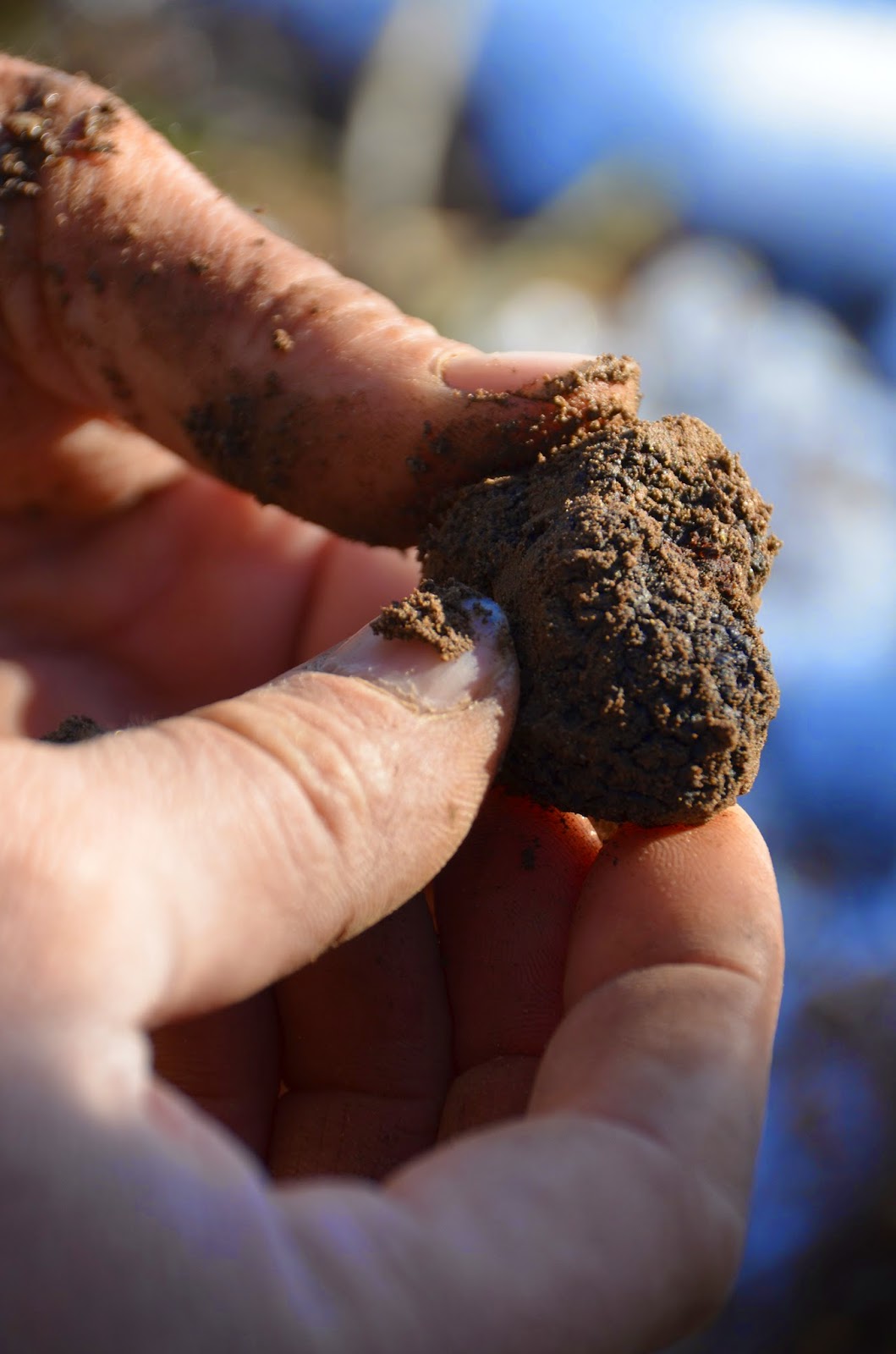 After five weeks of attending the Carpentras Truffle Market assiduously every Friday morning, I seem to have become a fixture. Or at least, many men are looking at me wondering who is this woman? and perhaps I've got some official credentials for being there? Perhaps that she's is a journalist? or?

I've also persuaded one man to take me and my guests out for a tour and a truffle hunt. It was the old photographer's trick. Take good pictures, and give them to him. Come back, purchase truffles. Be present but not intrusive. Next thing you know... he's offering. 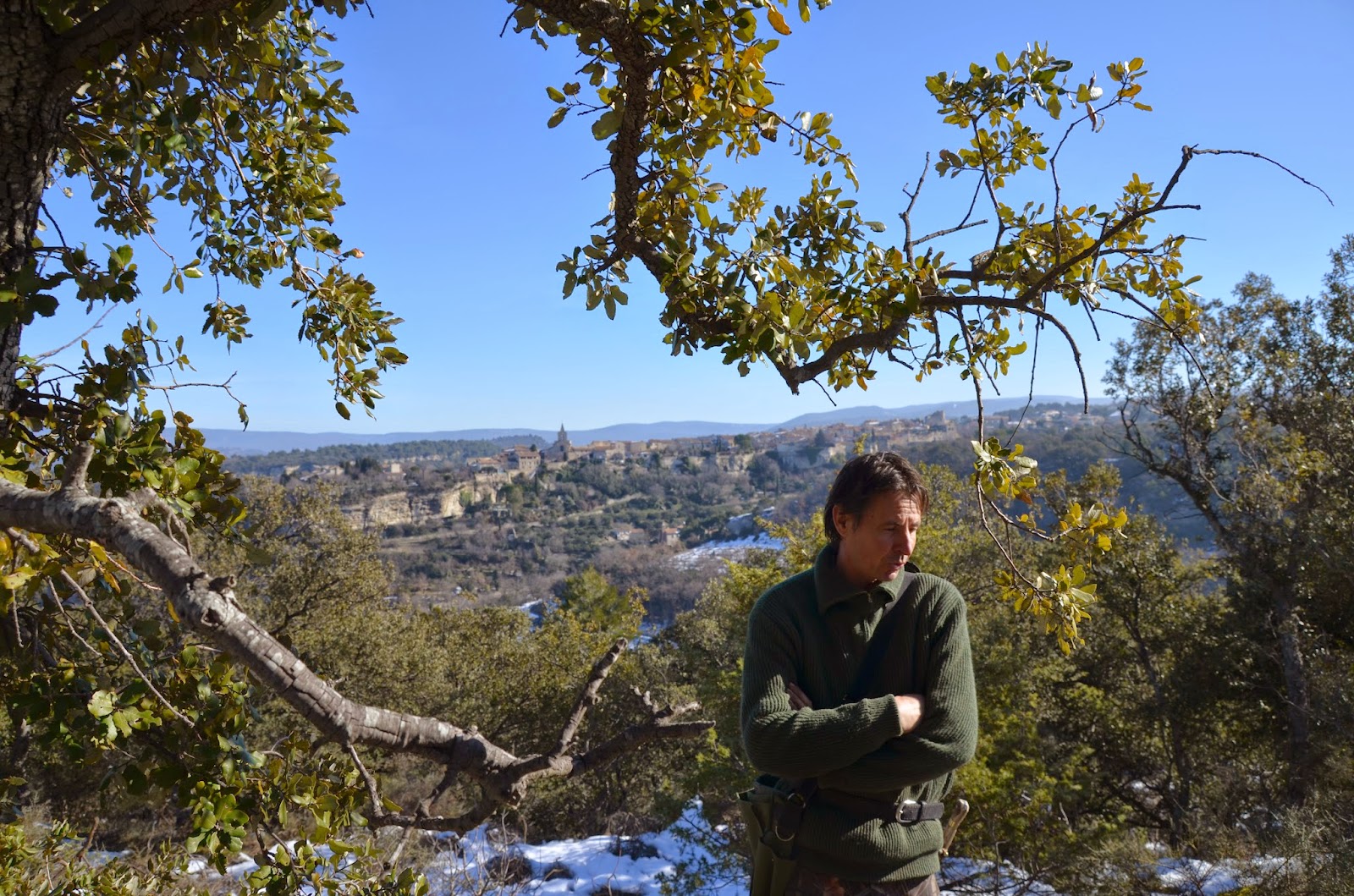 And so a plan was made for a Monday morning. However, that Sunday, the Mistral was blowing at 140km/hour, trees were down on the roads, and it was scary even considering leaving the house to bring my son to his friend's for the night. Checking the météo it was clear that truffling that Monday was not going to happen. So, I replaced the day's events last minute with some wine tasting at Châteauneuf-du-Pape (always a Plan B in my pocket), and arranged to meet the truffler close by his village on Tuesday morning.

There was a dusting of snow still on the ground, but the sun was shining brightly and the wind had calmed down. One couldn't ask for more lovely weather and conditions for being out truffling. 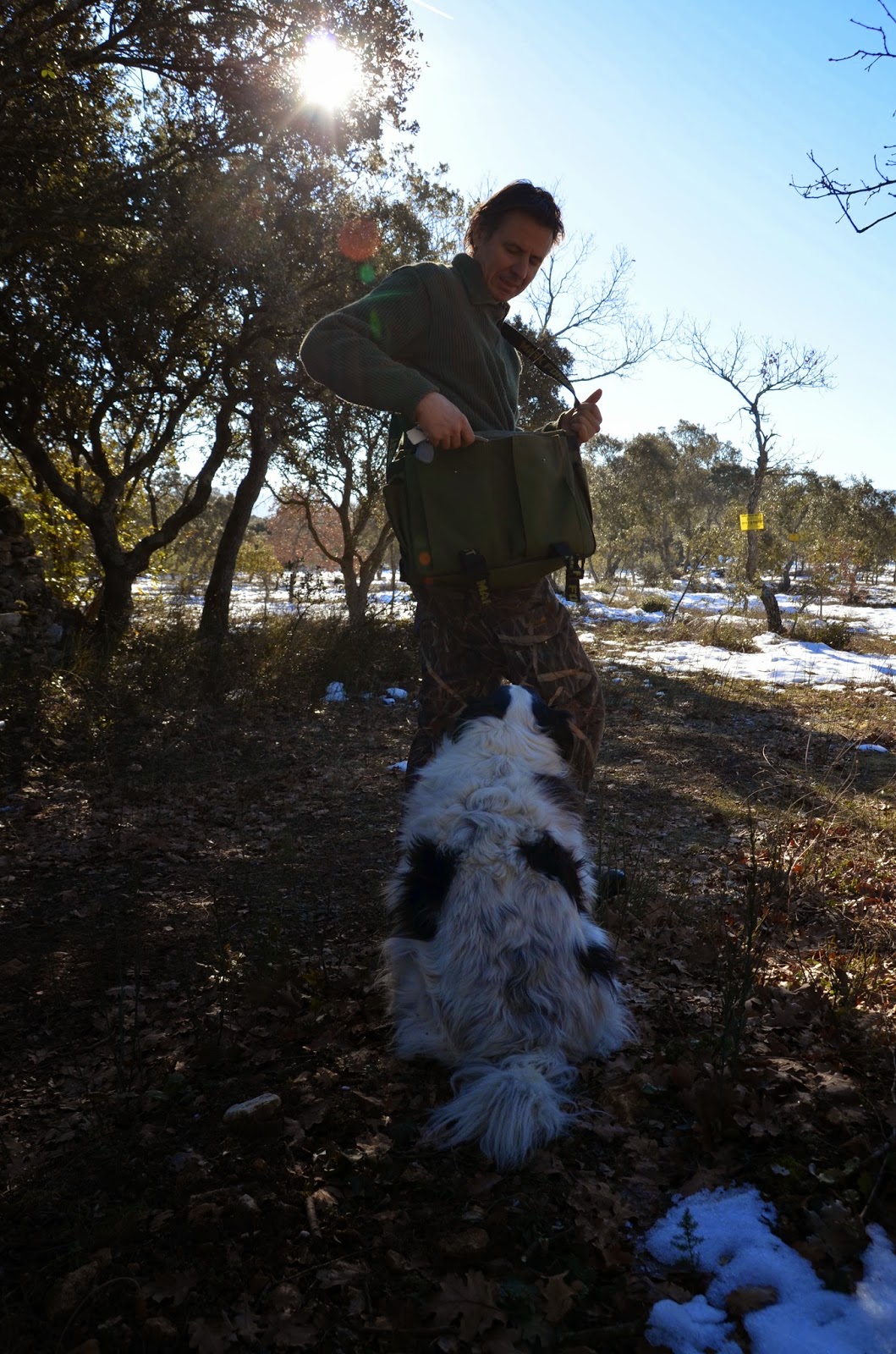 We climbed into his car alongside his dog, piled into the dust and muddy floors, and then off he zoomed to his truffle properties. Down bumpy dirt roads, off to one direction and then another, spectacular views of vineyards and the hillside town beside us, till we ended up in a scrub-brush surrounded clearing filled with oak trees of many sizes and ages, plenty of wild juniper (Cade), and a few ancient dry stone bories in various states of repair. You could imagine being here in another age, perhaps with goats out nibbling the bushes, and huddling away into the dark and protected circle of stones when a sudden averse rained down upon you. 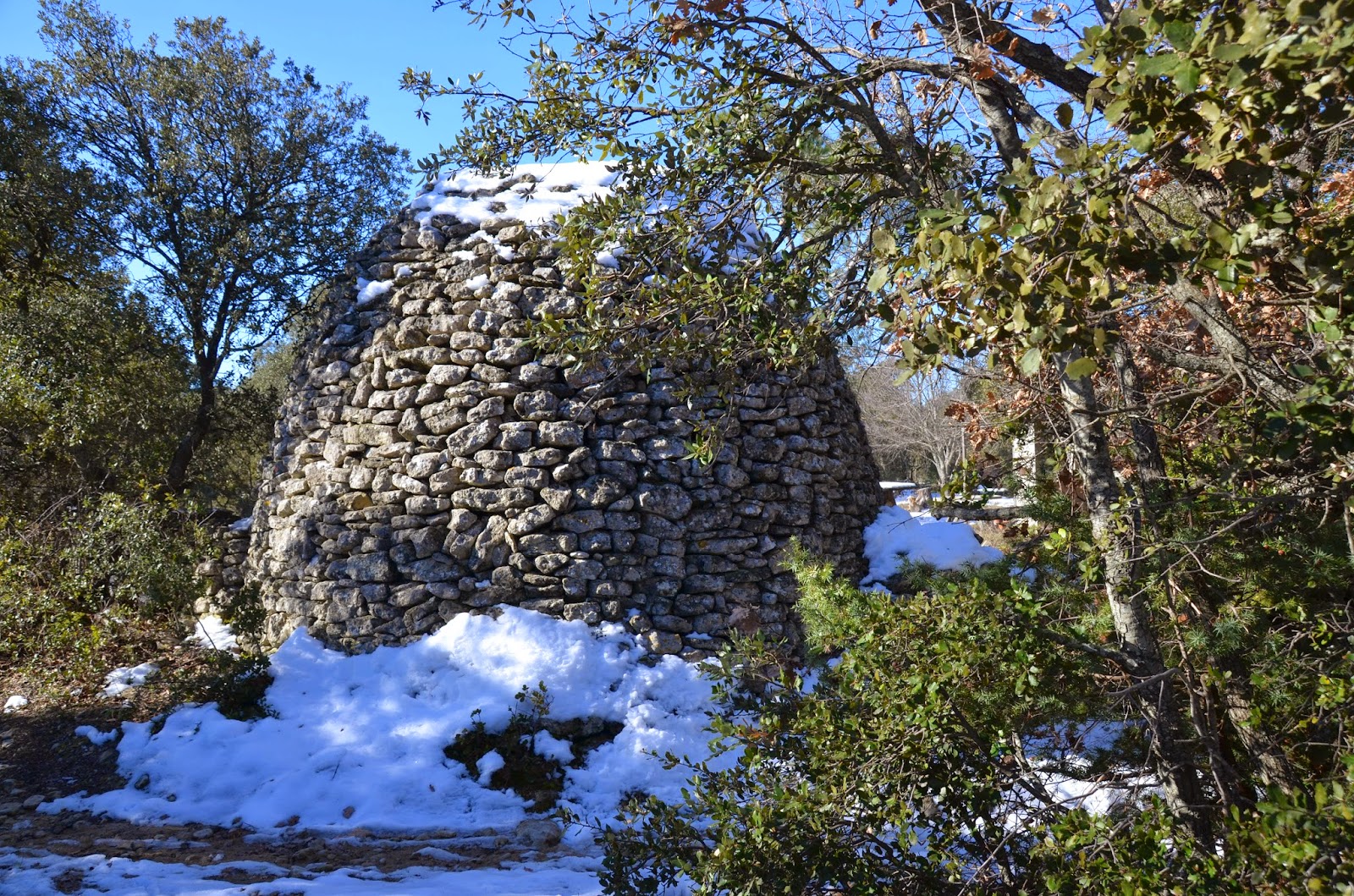 A bit worried by the thin city boots on one of my guests (her luggage had been lost for over six days by Air France!), he set off with his faithful canine colleague to see what he would find. I promised him that we were happy to simply be with him during this hunt, if we did or didn't find truffles, it would all be ok. More than once, he stopped, looked around, took a deep breath and shared how much he loves going to work every morning. 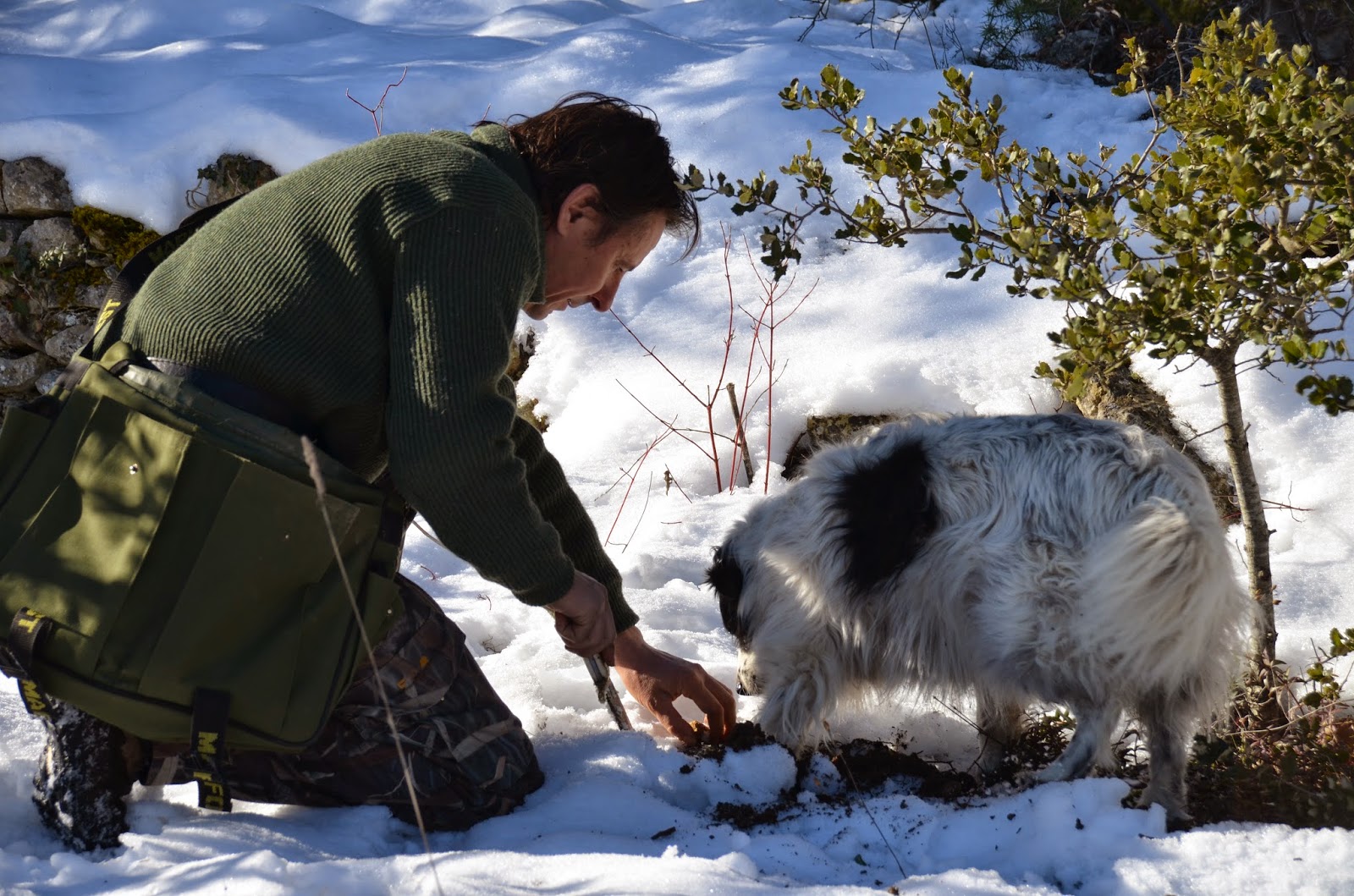 One of the things to know about experienced trufflers. They really know their lands and where truffles will be and should be. They've explored them carefully with very good dogs, repeatedly. And, once you've a tree that produces, it will continue to do so for years going forward. Thus, really, when they go out every week to harvest, they are guiding their dog to the best spots, encouraging him to sniff out in a far smaller radius than we imagine.

And so it was for us this day. We followed our guide across his orchard, to particular trees, by particular bushes, and in most cases there was something to dig up. Not always, but he found a good handful that day. 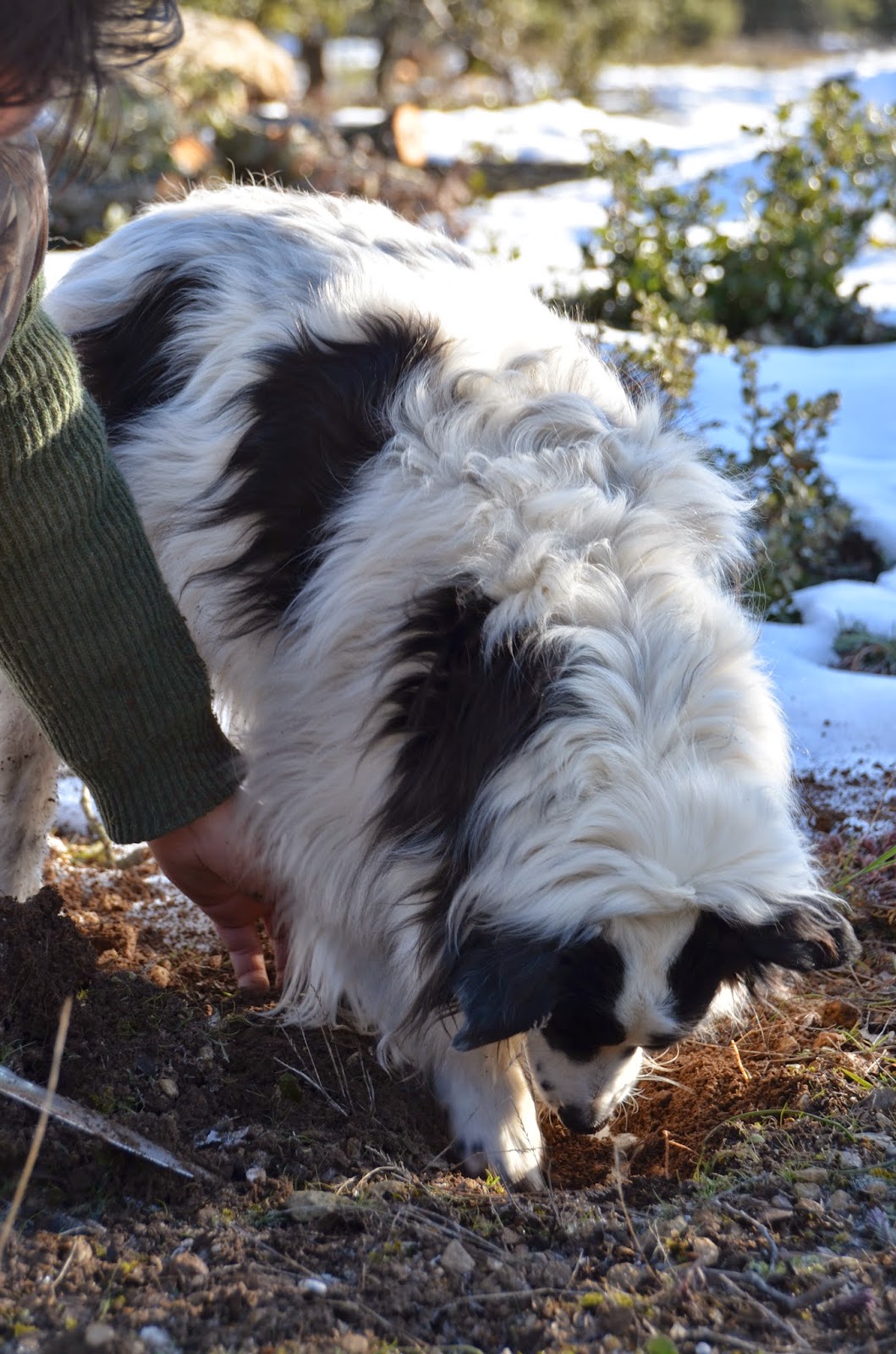 His dog was a funny one - trained to start digging (and thus save his master a bit of manual labor) he would occasionally break a truffle. But, the benefits of his front paws outweighed any loss of small truffles. This dog also was quite clear that he was a necessary part of the operation. As such, he happily received a treat when he found a truffle. But, he would also demand a second treat before getting back to work.  You could see him hang back, waiting, pretty much letting his boss know that yeah, he'd get back to work, but, ahem, ... cough it up first buster. 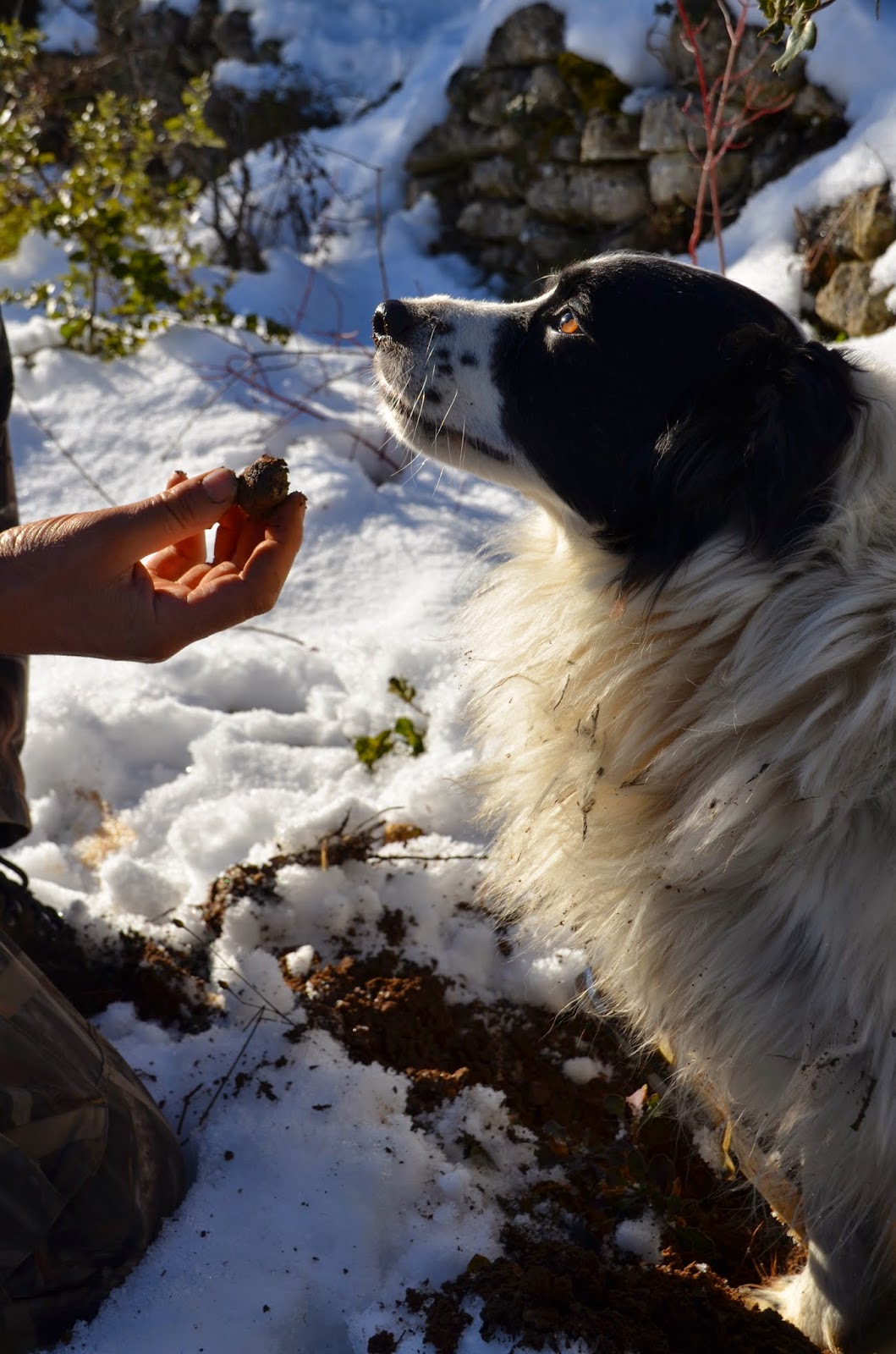 Our guide is an entrepreneur. He started out as a farmer, but then switched to stone masonry and repairing and renovating the traditional stone homes of the Lubéron. He now has a couple rental properties that he manages. He also purchases, restores and resells vinyl records with images on them, and he has a whole stash of books he sells second hand. Truffling is something he's come to more recently, and he's attacked it with a vengeance. He's read, interviewed, investigated, followed and learned all he can of the tuber melanosporum. And now he has purchased and renovated quite a number of truffle plantings that others invested in, tended and then gave up on.

Over the past twenty years, it has become a trend to plant truffle mycelium injected/infected oak or walnut trees on property that looks propitious for truffles. (limestone, good drainage, good exposure). I used to hear that in general 15% of your trees would bear in 15-20 years. As such, it was as much an investment for your children as for yourself. Purchasing lands that were in disrepair, but already planted with these trees, my guide had gone about pruning, clearing, and healing his lands. And, he's been well rewarded. 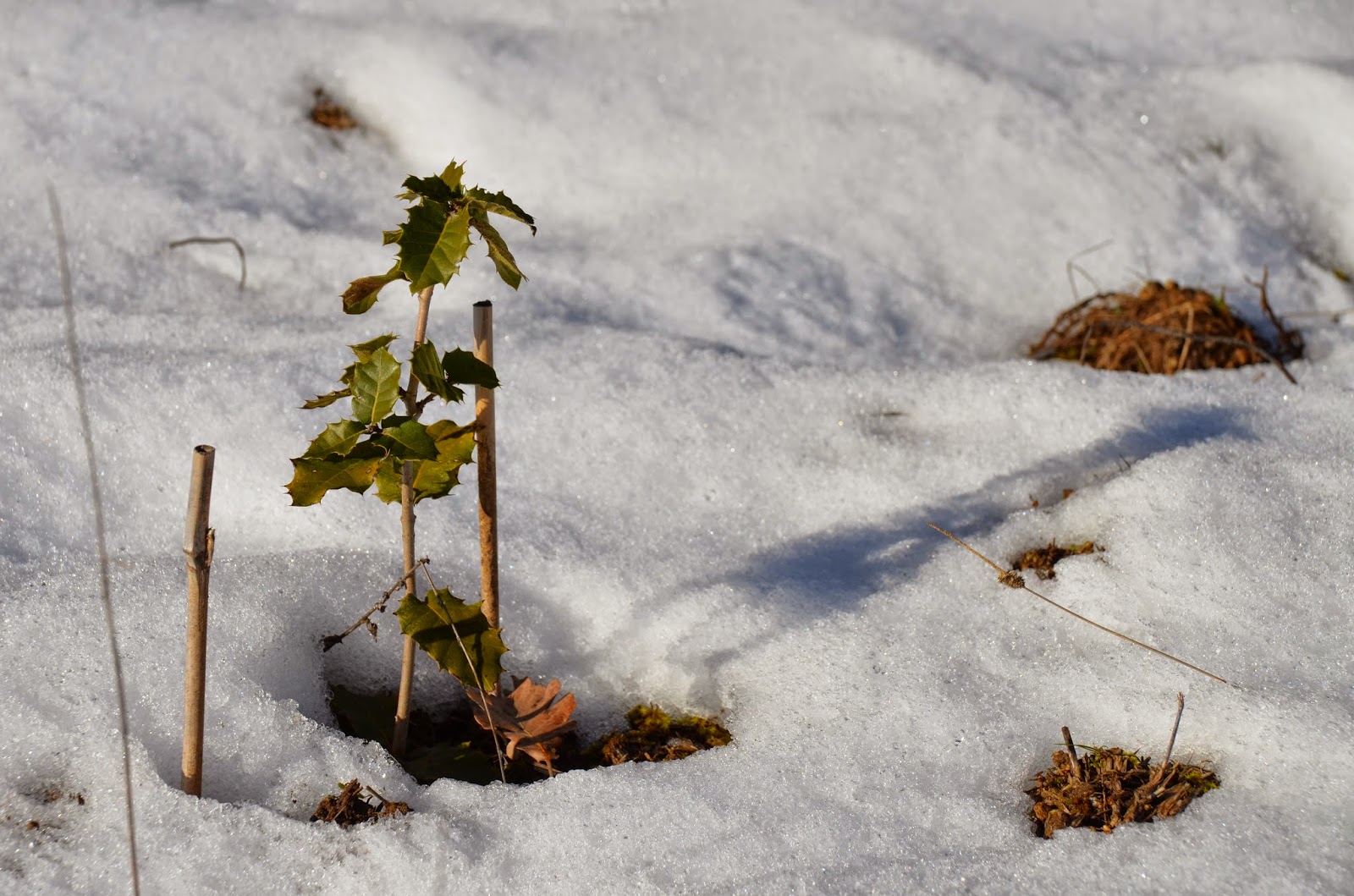 Once our hunt was over we went back to his house for an apéritif. My client with her thin city boots put her feet up by the fire in his wood stove, and we all enjoyed a glass of rosé. He showed us how he brushes off his truffles, divides them into various quality levels - brumales, mediocre, broken, good but small, good and good sized. He stores them in cloth bags in a cold place, and then brings them to sell Friday morning in Carpentras. He also has private clients who call him and request shipments - throughout France and the European Union. 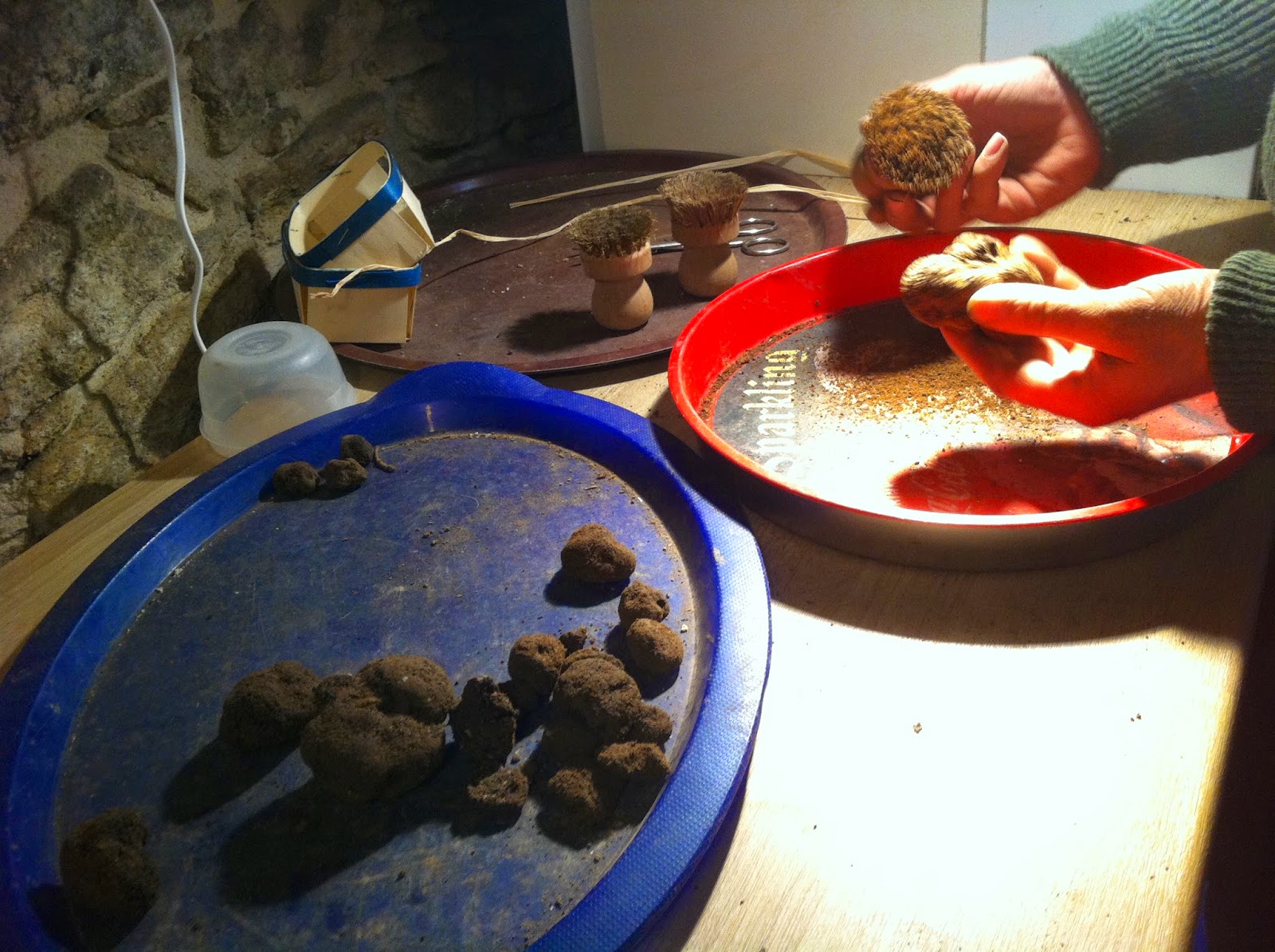 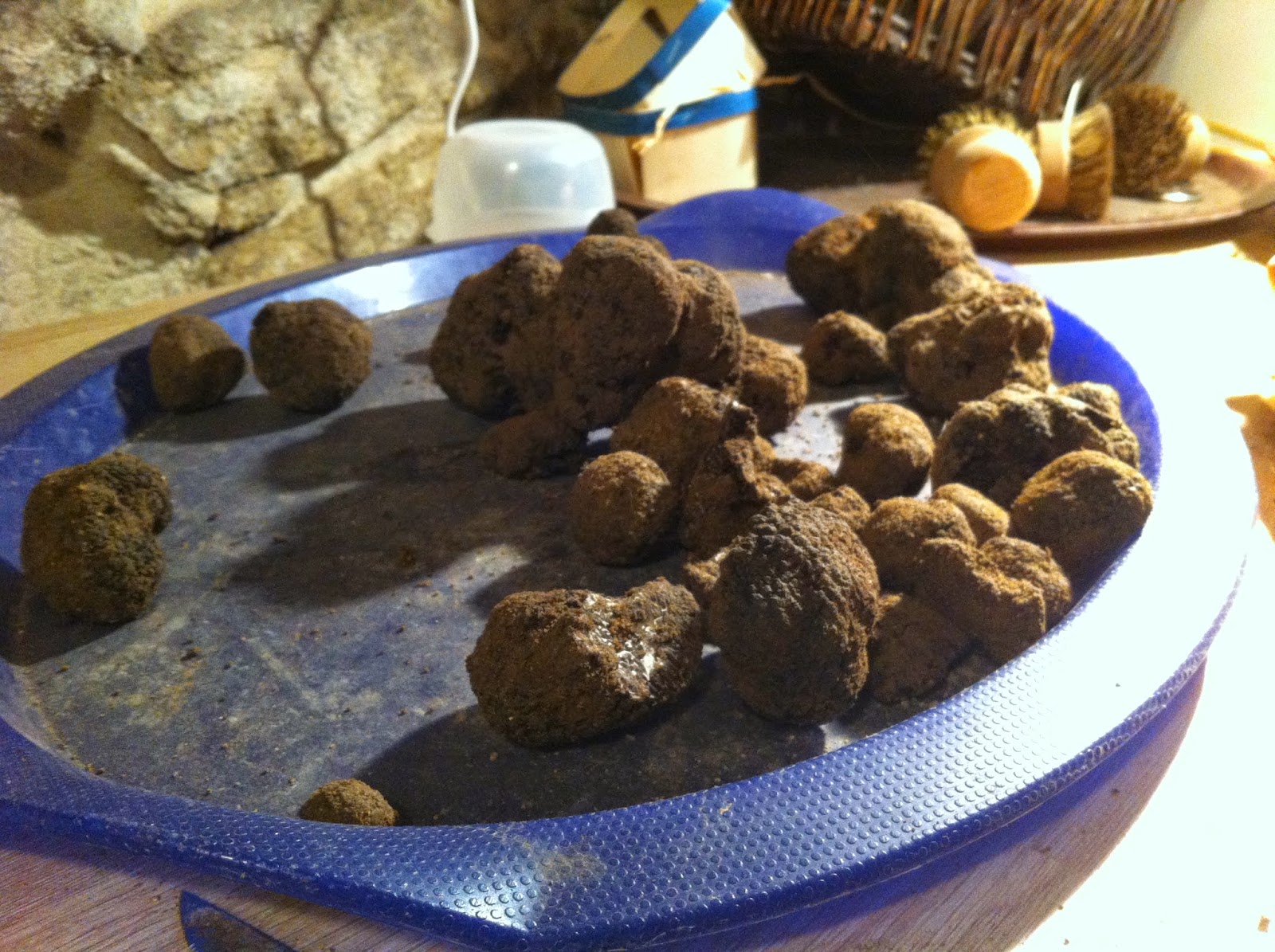 So he's both a truffler and a seller. A less common combination in that world where often there is a stark division between the trufflers (rabassaou) and the buyers/resellers (courtiers). As I hung around the truffle market on those Friday mornings, I'd get into conversations, or simply sidle over and start listening. The discreetly dressed, scruffy haired, capped paysans would explain to me that those on the outside of the ring of tables (the sellers) arrived in rusted out 2cheveaux, wore muddy boots, and hoped for the best. Those on the inside of the rind, (the buyers) arrived in BMWs and Mercedes, wore leather jackets, schnazy shoes and pretty much had the power in their hands. It was confided to me that the Courtiers got together ahead of time and set the price they were willing to pay. Thus, though from the outside, witnessing the price per kilo range from 190-240Euros the first week I was there (right after the New Year) to a high of 650Euros and back down to 450-500Euros my last week, seems pretty random and chaotic, it was actually pretty tightly controlled. The outside elements: rain, the Mistral, holiday weekends - quality, quantity and demand - were calculated into the estimates. Then men (and women) carrying upwards of 15-20,000Euros in cash in a pouch draped across their chest, carefully held under their coats, called the shots. 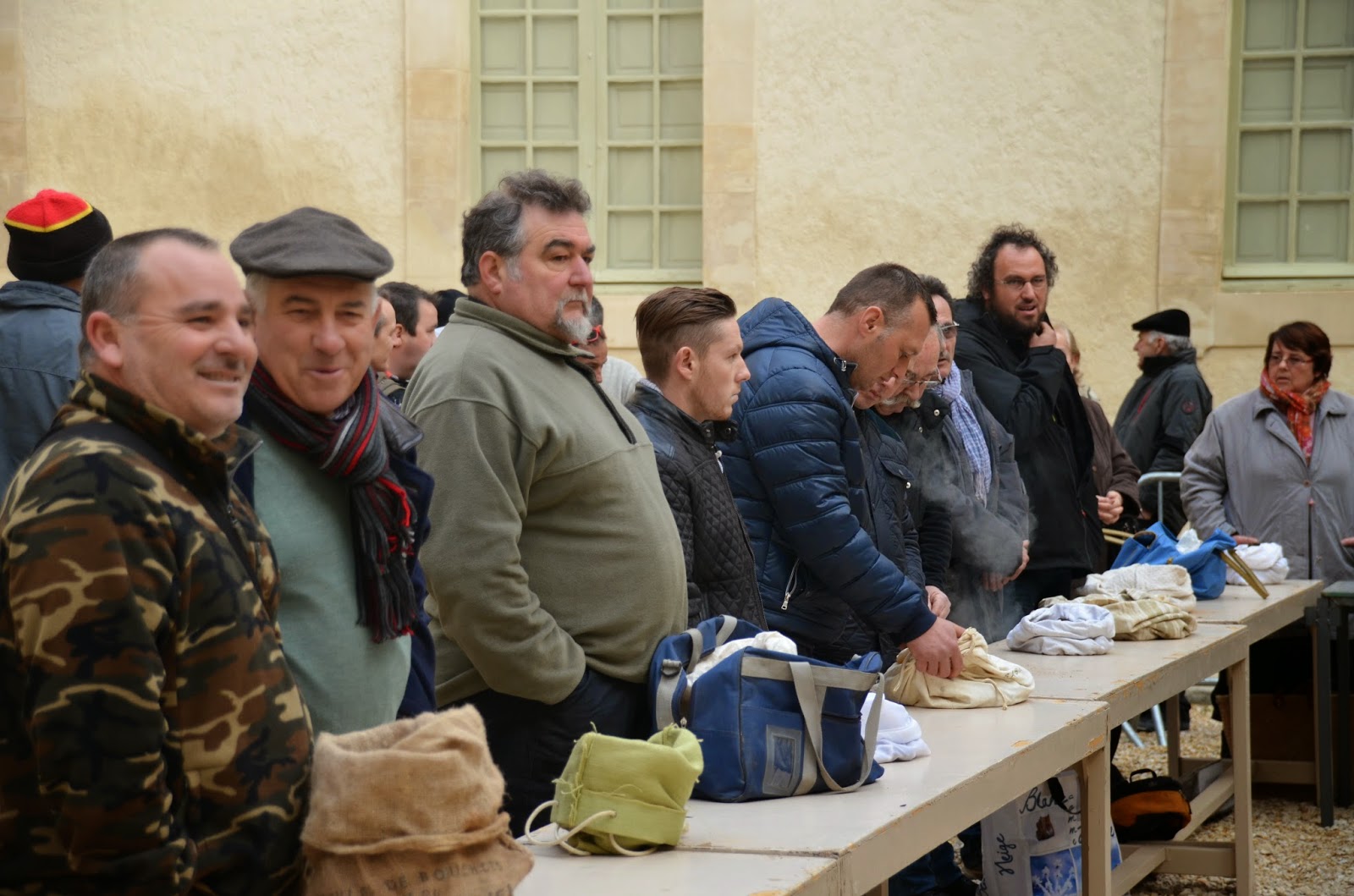 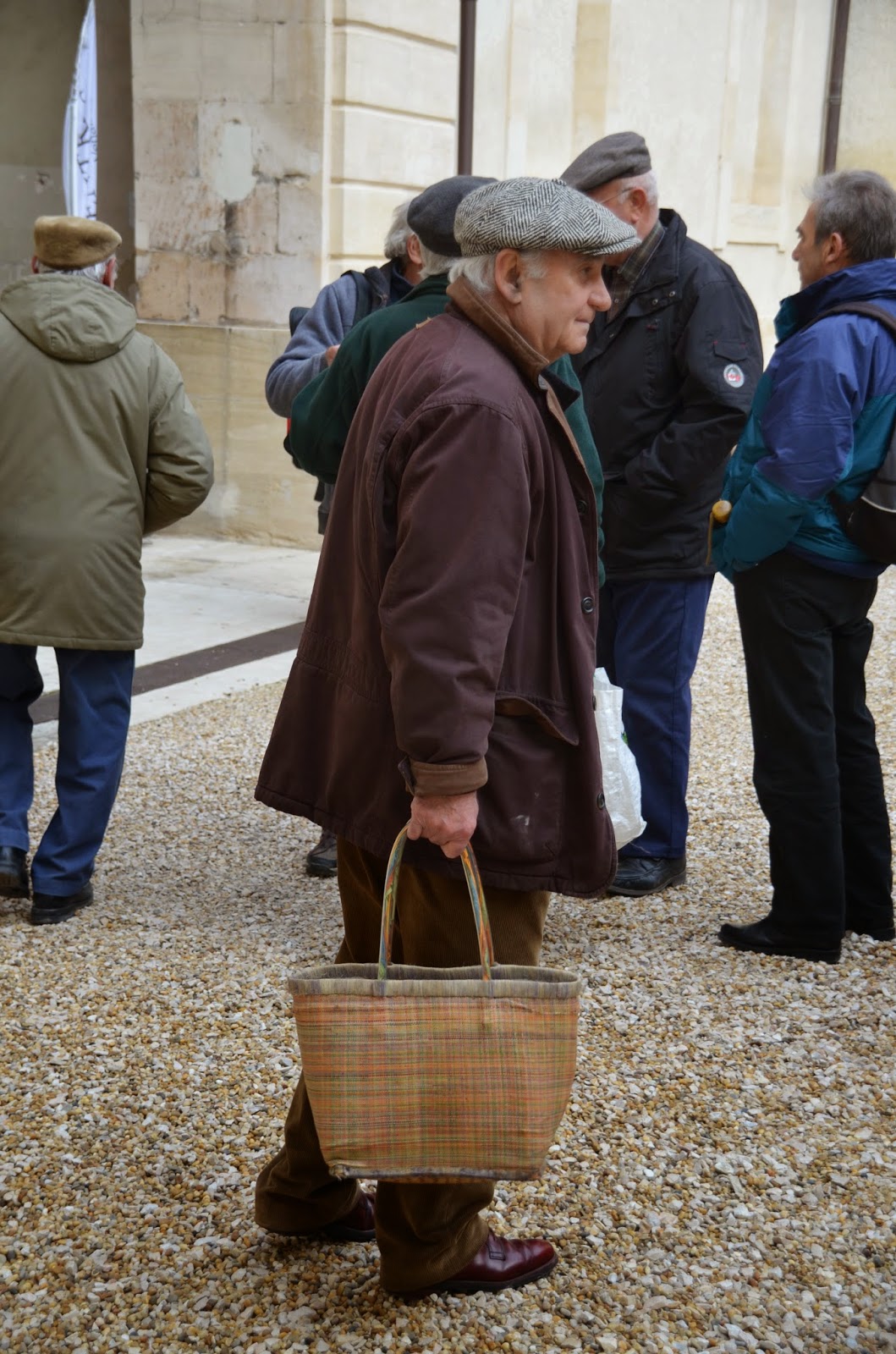 My last morning at the market I spent time chatting with a Courtier. He was gracious and informative, letting me know that in general, he purchased between 25-30 kilos each week, and that his primary markets were Manhattan and LA, where he had a personal/professional connection with an ex-pat Frenchman (or woman) who did the selling on the ground there. As he bantered back and forth with one of the more scruffy of the gentlemen who are present weekly at the market, after taking a good sniff in his canvas bag, "voleur ! tu n'as que des brumales, je n'en veux rien de ton sac ! va abuser un autre" the other retorted laughing, that he knew he had true melanosporum truffles in his bag, and he'd be off to find a purchaser more worthy. Perhaps.. 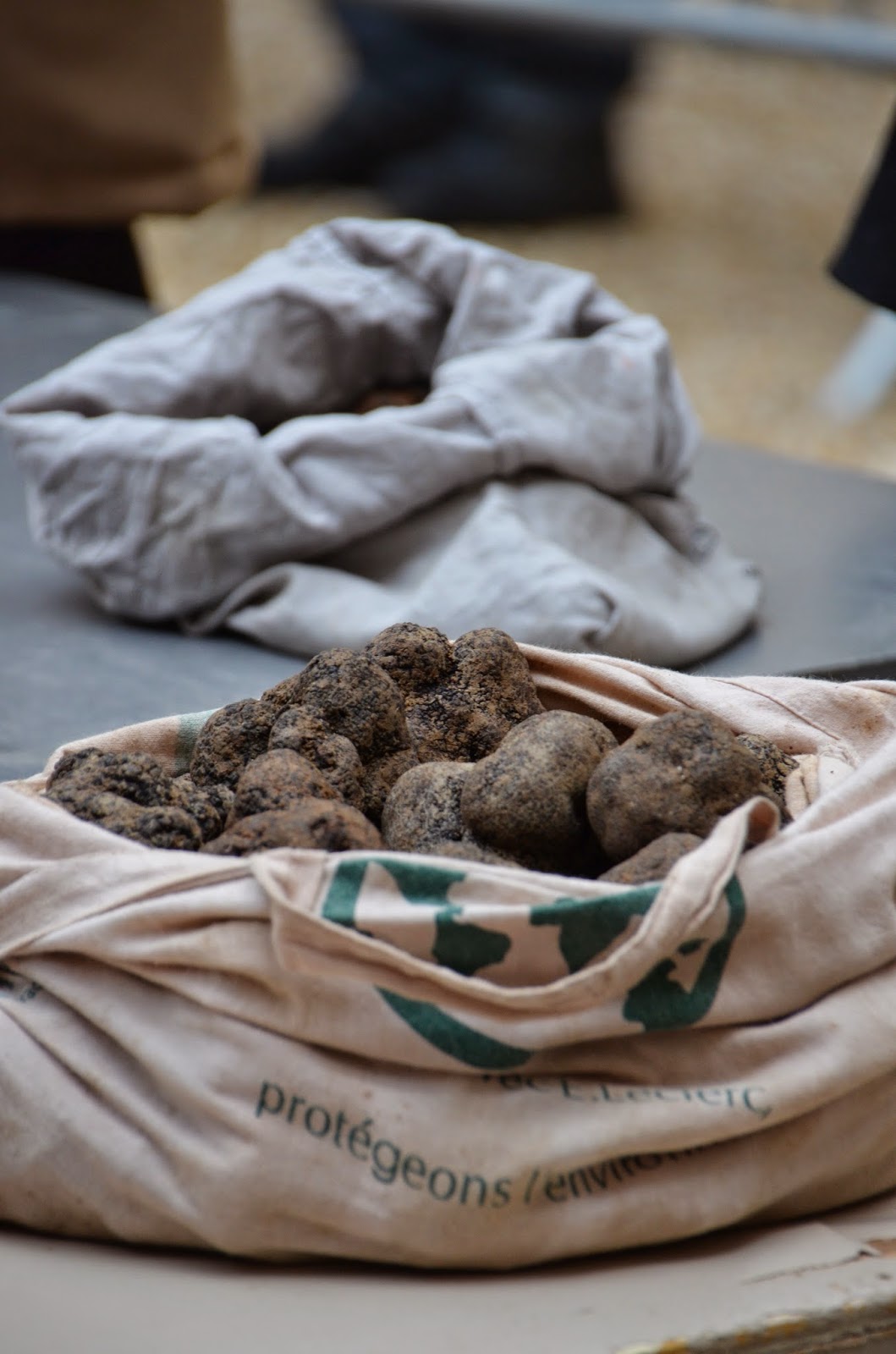 I downed my café noisette, took a last few photos, and off I went. Next time, I hope to repeat my attendance, and perhaps, be taken into the inside ring to sniff and inspect alongside the Courtiers. At least as I left that sunny morning, it felt quite possible, and only another few visits away. 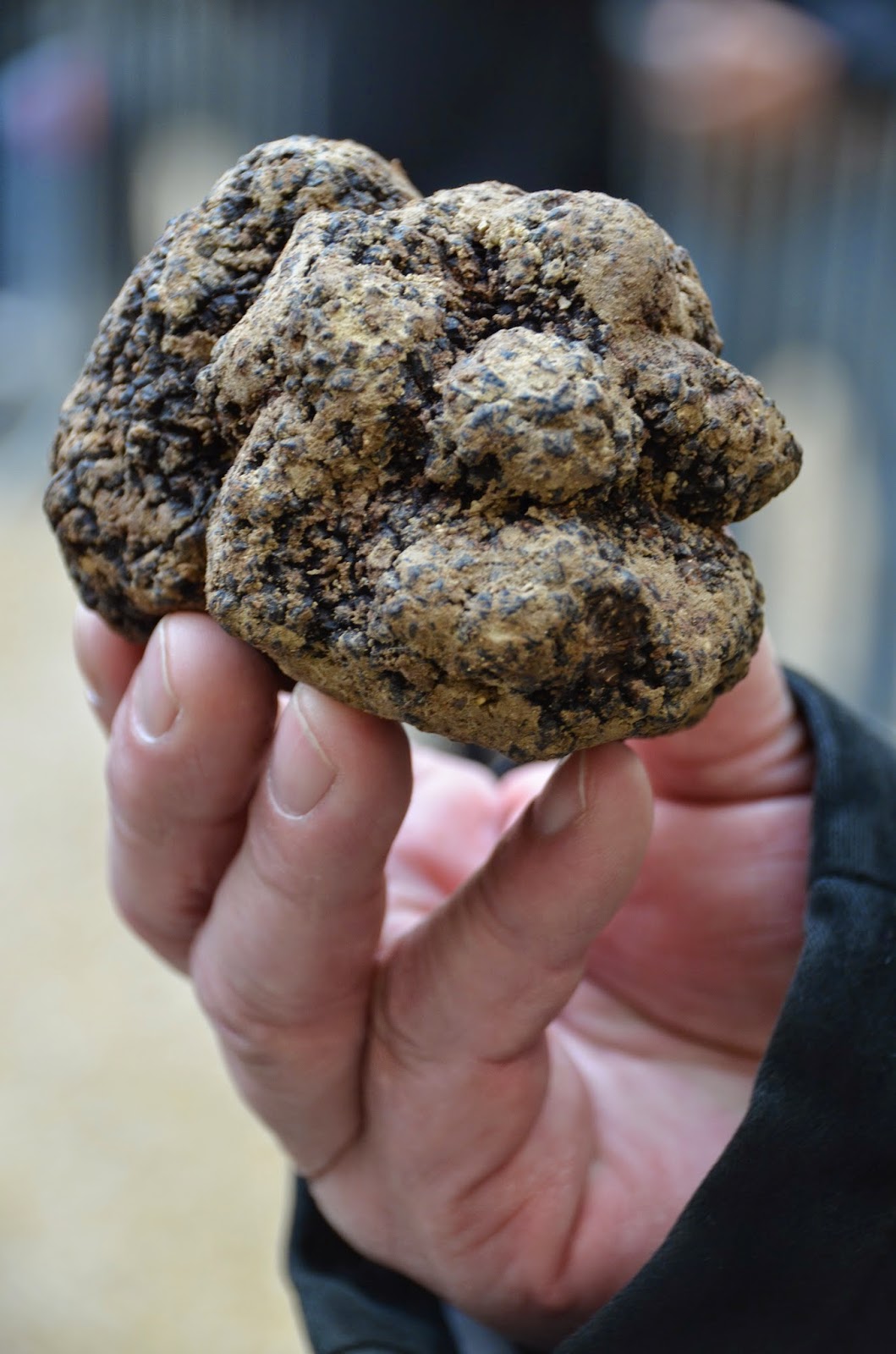